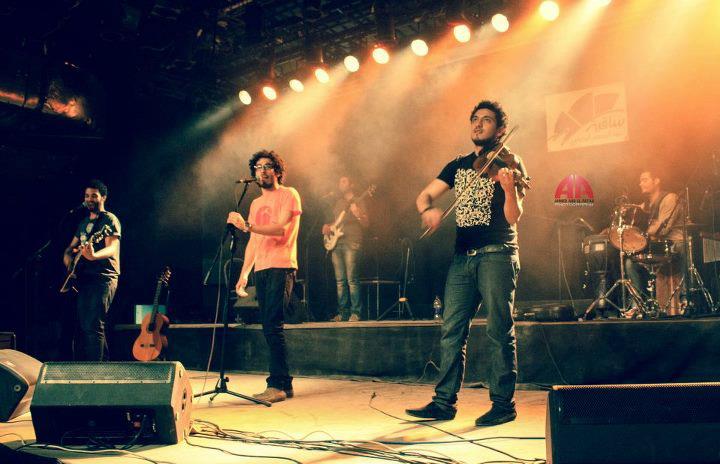 When it comes to Egypt’s not-so-underground music scene, Taxi has been around for a while.  They have long been pleasing fans, challenging the existing order and creating good music. Tuesday’s performance at the El Sawy Culture Wheel was no different, but was it enough?

The crowd was a cheerful mix of mostly younger people from different backgrounds, older than the typically teenage crowd found at Sawy in the Eid season. The turnout was excellent and the event started on time.

The music can be described as a mix of largely accessible pop rock in Arabic form with instrumental and acoustic elements, such as the token violin also present in other bands. The familiar mix is in line with other Arabic bands of similar stature. The vocals were cheerful and accessible, if somewhat generic and the lead singer had a slightly awkward but all-the-same charming presence on stage without coming on too strong. He was doing a good job at engaging the audience that was only too happy to oblige.

The lyrics of Taxi are known to challenge the status quo in the country and have attempted to describe the different societal conditions of Egypt with this performance being no exception. The lyrics can be a big hit or miss, with some songs inventive and creative while others become formulaic and verge on the point of being cliched. The songs have not changed much either in style or in substance from our pre-revolution day, which is, in part, because many of these conditions have not changed either.

But one cannot help but feel that what was new a few years ago now feels generic and a bit dated. It is true that Taxi’s formula works and there is no doubt that the crowd, for the most part, loves it. And at EGP 15 who would not? The concern of Taxi should maybe be standing out from a myriad of bands that are offering, or have come to offer, exactly the same thing.

Opinions differed on the band’s performance with many adopting the “why ruin a good thing?” attitude: “the band is doing different music than the usual Arabic pop and I like it very much. They do not need to change their music. Why should they?” said Rana. Others like Manar simply said, “they are crowd-pleasers and they are fun.”

Hasan said that he had been “a long-time fan, been a member in Sakya for a while and this is typical of their band performances.” He added that the band was “the same” though without indicating whether that was a good thing or not.

But in comparing Taxi to other similar bands, the point is not to deny them the merit that can be found in their art. Regardless of whether something is different or creative or new, if it has aesthetic value, then that will be enough for many people and that is the case with Taxi.

In conclusion, Taxi offers an accessible form of music that is likely to become a variant of Arab pop rather than the ‘indie’ label some ascribe to them. That this does not necessarily spell bad things for them or for their audiences was proven by Tuesday’s concert when the crowd seemed to enjoy their lively and fun performance.