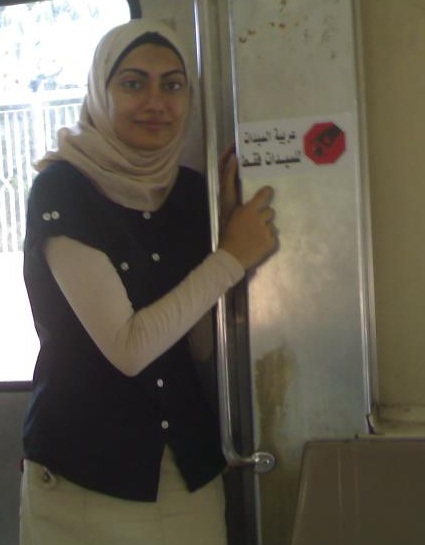 About 20 male and female activists chose campaigning over sleep on Friday morning and plastered posters inside and outside the female metro carriages that read “The female carriage is for women only” in a new campaign called “Be a man.” The campaign’s name suggests that better men ride in the mixed carriage, not the female carriage.

Shereen Badr is among a group of activists who decided launch the campaign on Friday, which received a mixed response.

“Of course we were subjected to aggravation. People from the lowest ranking workers to the highest ranking employees who passed us by would tell us to go and get permission from the stationmaster, which we did do,” Badr explained.

“And by the end of the day, some of our stickers were taken down.”

Men have frequently been riding in the female metro carriages, set aside for women only. Badr has been actively trying to combat the frequent violations she sees in the metro and has decided to file a law suit against the Ministry of Interior, she told the Daily News Egypt.

“I’m filing a law suit against [the Ministry of the Interior] for negligence and failure to do their jobs” she said. There are many problems in the metro, Badr said, including men entering female carriages and the frequent presence of unlicensed vendors in the metro.

“I have already started communicating with rights lawyers and we will start filing reports and we will ask anyone who has filed reports to send them to us. We will also use the pictures and videos that we have [of the violations].” Badr is using Twitter and Facebook to encourage those willing to help in the lawsuit to join her and the lawyers.

Earlier this month, Badr took part in a protest held inside the metro protesting the death of Madeeha Saber, who reportedly died when the metro stopped in a tunnel for about a half hour.

The metro is run by the governmental Egyptian Company for Metro Management & Operation and is the first metro to be built in Africa and the Arab World. It is also among the cheapest methods of transportation in Cairo with a ticket price of EGP 1.