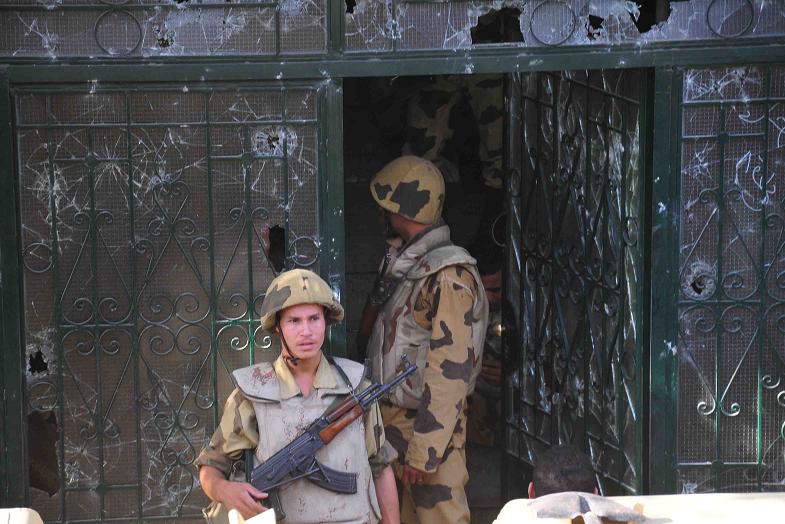 The verdict on the trial of Israeli Embassy protesters was read on Sunday in addition to the adjournment of the Port Said massacre trial and the trial of the men charged with stabbing a Suez man to death, in what was a busy day for courts across the nation.

All 76 defendants charged in connection with their participation in protests in front of the Israeli Embassy were found guilty and with one exception received suspended sentence of one year with labour. Only 30 of the 76 defendants received their sentence in person, as the rest had not showed up. A former Egyptian police officer, Omar Afifi, was sentenced in absnetia to five years. Afifi did not take part in the protest as he lives in Washington DC in the United States, but according to state-run Ahram Online was sentenced for incitement of violence against the police.

Othman Mohamed, who attended the trial, said the court room went wild when the judge read the verdict. “Families of the defendants started screaming. The defendants also started banging but that was before they realised that the sentence was to be suspended.” Abdel-Kereem said lawyers tried to bring order to the court by telling the defendants that they still had not heard the rest of the sentence.

“The families are upset because their children will have criminal records,”Mohamed said, adding that the defendants will not be able to travel outside the country for a certain period of time.

Since this case was viewed extra-judicially inside the Supreme State Court of Emergency, the verdict can’t be appealed. “Our only hope is a pardon from [President] Morsy,” Abdel-Kereem said.

The police had to remove the defendant from the court room, Abdel-Kareem said. “It took the police a very hard time to do that because the defendants were yelling and holding on to the cage. But when we went there, a policeman came and told us you violated an embassy which is a diplomatic body so you have to receive a sentence in order to please that country.”

Abdel-Kereem was furious with the fact that the defendants were asked to pay around EGP 200 in order to be allowed to leave the court. Some of the defendants not from Cairo did not have their families present and were unable to pay the amount.

“We managed to gather money for everyone but how can they keep those without the money in when the court said they can leave?” Abdel-Kereem did not know what the money was paid for and said the defendants never received a receipt on payment, instead having their names “written on the back of a piece of paper with a red pen.” He believes that the money was collected by an employee at the court.

Abdel-Kereem was arrested after taking part in protests held in front of the Israeli Embassy on 9 September which continued into the morning of 10 September 2011 after Israel killed five Egyptian border guards in August 2011.

In a separate case, the trial of the three men accused of killing Ahmed Hussein Eid, the 20 year old engineering student who was stabbed and died on 1 July in Suez, was postponed to 25 September according to Ahram Online.

The prosecution presented its case on Sunday in a trial in session of 73 men accused of killing over 70 fans in a football match between Al Ahly and Al Masry football teams in Port Said in February. Among those being tried are police officers, who the prosecution said failed to carry out their duty to maintain security. The prosecution asked for the accused to be given the maximum sentence permitted by law, according to MENA.