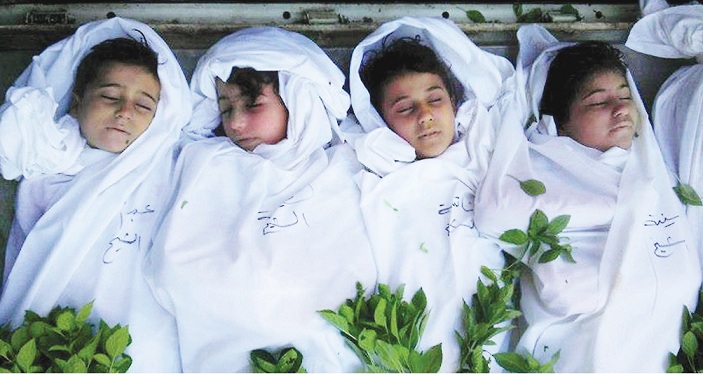 Activists in the Sunni town of Daraya, southwest of Damascus, have accused the Syrian government of committing a massacre after Syrian forces recently retook the previously rebel-held town on Sunday. According to Reuters, activists on the ground have counted over 200 bodies in homes and basements which they believe are victims of “execution-style” raids by the Syrian army.

Reports have also surfaced claiming that the Syrian Air Force Intelligence Officer, Jamil Hassan, has been assassinated by his aide. Due to the state of affairs in Syria and restrictions on foreign media, the Daily News Egypt has been unable to independently verify these claims.

Daraya was held by opposition fighters before the town succumbed to heavy shelling and an incursion of ground troops on Friday. Including the massacre, the death toll stands at 440, one of the highest reported death tolls caused by the conflict since the uprising began last year.

The claim follows a video posted online by activists in Syria, showing various men laid out side by side in a mosque in Daraya. Injuries to the head and chest indicate the use of guns.“These are martyrs on the floor of the mosque,” a man can be heard saying on the recording. “This is the revenge of Al-Assad’s thugs. There are more than 150 martyrs in this mosque.”

Syria’s official state news agency confirmed Syria’s “heroic armed forces cleansed Daraya from remnants of armed terrorist groups,” but did not give details. The agency claimed they are fighting terrorists “who committed crimes against the sons of the town and scared them and sabotaged and destroyed public and private property.”

The United Nations investigators have concluded that many of these massacres, blamed on rebel terrorists, have been actually carried out by the government itself. Earlier this month the UN released a report with their findings, accusing forces loyal to Assad as responsible for the massacre in Houla last May which left 100 people dead. The UN report does not specify whether those killed were military or armed civilians and condemns both Assad’s government and the rebels for committing war-crimes.

The rebels are accused of carrying out summary executions in cities like Aleppo, but their crimes pale in comparison to crimes committed by government loyalists. The UN also estimated in the report that at least 18,000 people have died as a result of the fighting between the largely Sunni opposition and Al-Assad’s Alawite government.