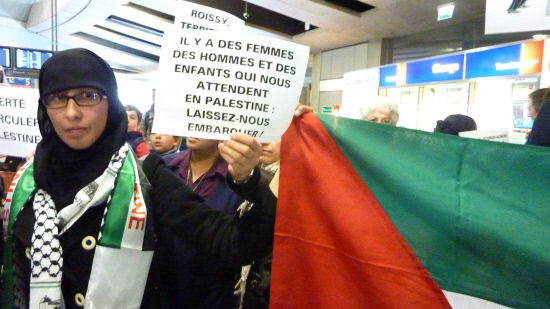 Pro-Palestine activists are trying to breach the Israeli “siege” on Palestinian territories by entering Palestine through Jordan in an attempt referred to as an “airflotilla.”

Activists in the airflotilla organised by the Welcome to Palestine (WTP) campaign will be crossing from Jordan into Palestine on Sunday night. The WTP campaign has organised two similar attempts before, but a press release by the campaign says that the previous attempts were “faced with illegal repression although their only supposed crime was admitting that they were visiting Palestine.”

The first attempt was in July 2011 and the second in April. In both attempts, activists flew into the Ben Gurion Airport to announce upon arrival that they are going to Palestine. Israel contacted airlines telling them not to allow the activists to board the flights. Most of those who did reach the airport were reportedly detained and deported but this time the campaign is using a different approach by attempting to enter Palestine via the King Hussein Bridge from Jordan.

George Rishmawy, a spokesperson for the campaign in Bethlehem told the Daily News Egypt that “90 percent of activists who say that they are going to Palestine for any kind of solidarity with Palestinians are turned away. They have to say that they’re coming as tourist, or to visit the Holy Land… but even if Israel suspects that they are there for solidarity they can be turned away.”

Nicolas Shahshahani, a Paris-based spokesperson for the campaign told the Daily News Egypt that there are “over 100 activists from Europe and North America… who as we are speaking have boarded busses and are on their way” to the King Hussein Bridge, also known as the Allenby Bridge. The bridge connects Jordan to the West Bank crossing the over the Jordan River.

The King Hussein Bridge is controlled by Palestinian authorities in coordination with Israel on the West Bank side.

Both Shahshahani and Rishmawy are not sure what is expected to happen today and whether the activists will be allowed to go through or not. “Frankly, we don’t know” Shahshahani said. Previous attempts were denied and Israel gave the argument that “we do what we want on our sovereign territories and we don’t have to explain whatsoever,” he explained.

“Most expectations are that they will be denied entry… but we are trying,” Rishmawy said.

The activists arrived in Jordan on 23 August and toured the Palestinian refugee camps in Jordan. On Sunday, they held a press conference in Amman, Jordan’s capital, before boarding the buses to the bridge. In the West Bank, they plan to stay until 31 August.

“The programme is focused in this version of the mission on the right to education as Palestinian children are resuming schools,” Shahshahani said. “The delegates have a tonne of stationery to give them.”

The activists are invited by the Governor of Bethlehem as well as youth and civil society organisations. They plan to visit Hebron, Al-Quds, Ramallah, the Jordan valley, and Bethlehem during their stay.

There had been previous attempts to enter Palestinian territories. Activists have in the past tried to break the siege on the Gaza Strip by sailing and docking in Gazan ports.

One such attempt is currently under way. A ship, the Estelle, is sailing from Sweden and is aided by organisations from France, Italy, Spain, Greece, Canada, the United States, and Australia. The attempt was organised by the Ship to Gaza Initiative which works in collaboration with a coalition called the Freedom Flotilla lll. Estelle is expected to reach Gaza sometime in October.