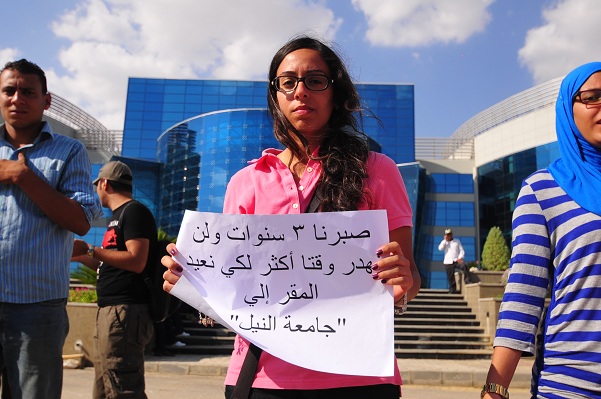 Dozens of students, professors, and other members of the Nile University (NU) community entered the scientific research university’s campus to conduct a sit-in against the Government’s confiscation of buildings on its new campus.

Students from other universities in Egypt also attended to support NU. Students from NU have repeatedly protested outside the campus gates for months but this was the first time they breached the gates and protested on the empty campus.

“We announce today the beginning of operations to prepare for the new 2012-13 university year by exercising our legitimate right to be present at the official campus headquarters in Sheikh Zayed,” NU students said in a statement on Tuesday.

“We talked to the police and said they can come if they want but we’re assembling peacefully,” said Heba Shalaby, who is involved in the Save NileU initiative, which has worked to spread awareness of the plight of Egypt’s first scientific research university. “We have the legal documents that show this belongs to Nile University.”

NU is a non-profit and privately owned university established in 2006 by the Egyptian Foundation for Technological Education Development (EFTED). From its inception, NU students studied at the university headquarters in Smart Village, but were given 127 acres of land on an undeveloped 300 acre plot previously earmarked for development as “Zuweil City” near Sheikh Zayed.

Ground was broken at the Zuweil City plot in 2000, with the intention of building a scientific research facility to be overseen by Egyptian Nobel laureate Ahmed Zuweil. However as time passed, a number of problems hindered construction of the institute and the plot was bare until a presidential decree via the former Prime Minister under Mubarak, Ahmed Nazif, authorised government construction of a campus for NU.

While the Government paid construction costs, NU invested in state-of-the-art equipment and infrastructure.

According to Save NileU, 40 Egyptian scientists who had been working in prominent establishments throughout the world managed to publish 700 scientific research reports, including 250 with the help of their graduate students, in four years of work.

Following Egypt’s uprising, more than ten years after the initial allocation of land, Prime Minister Essam Sharaf authorised the original plan to build Zuweil City, jeopardising NU’s new campus, which was to be absorbed by the new scientific research hub. The two parties entered discussions to merge the two institutions, but talks broke down in 2011.

“We’ve been made promises by everyone; Prime Ministers, the Minister of Scientific Research, and the Minister of Education, but nothing has happened,” Shalaby told the Daily News Egypt. She was also quick to assert the community’s fight is not with Ahmed Zuweil or his scientific research initiative, but the government authorities that have not delivered on previous promises.