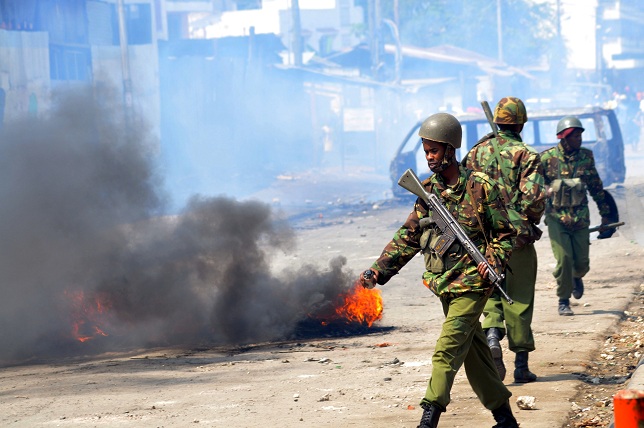 Riots have continued for a second day in Kenya’s second largest city, as Mombasa’s Muslims protest the killing of a local cleric who was subjected to United States sanctions last month.

Aboud Rogo Mohammed was killed on Monday in a drive-by shooting incident as he rode in his car with family, according to AFP.

Rioters and riot police skirmished, hurling rocks and teargas, in the predominantly Muslim neighbourhood of Majengo on Tuesday, according to Reuters. Protesters gathered around the mosque where the late cleric used to preach, blocking the streets leading to the mosque and torching cars parked nearby, AFP reported. The police have arrested a number of protesters, while many of them blame the cleric’s killing on the police.

Fears that the incident might trigger further sectarian tensions have been raised after protesters set fire to a number of churches, resulting in a death on Monday, Reuters reported. A march by organised by church groups set to have taken place on Tuesday was cancelled in an attempt to prevent further clashes.

Rogo Mohammed was one of six people the US and United Nations imposed sanctions on in July, after they accused him offering aid to neighbouring Somali militant groups, mainly Al-Shabab Al-Mujahedeen.

Adam Szubin, the director of the US Treasury’s Office of Foreign Assets Control, responsible for imposing US sanctions, told the BBC in July that Rogo Mohammed used his position as a preacher and ideological leader to raise funds for Al-Shabab.

Al-Shabab responded angrily to news about the cleric’s killing, urging Kenyans to boycott next year’s presidential elections in retaliation for what they described as a “witch-hunt” against them by Kenyan authorities.

“Muslims must take the matter into their own hands, stand united against the Kuffar (non-believers) and take all necessary measures to protect their religion, their honour, their property and their lives from the enemies of Islam,” they said in a statement quoted by Reuters.

Al-Shabab’s activities have intensified in Kenya since the East-African country started pursuing militants into Somalia, accusing them of carrying out kidnappings across Kenyan borders and destabilising the region.

Meanwhile, the Somali militant group was struck a heavy blow when pro-government forces retook the Somali port of Merca, 70 kilometres south of Mogadishu, according to BBC news. Al-Shabab had already lost control over most of the Somali capital of Mogadishu during last year.