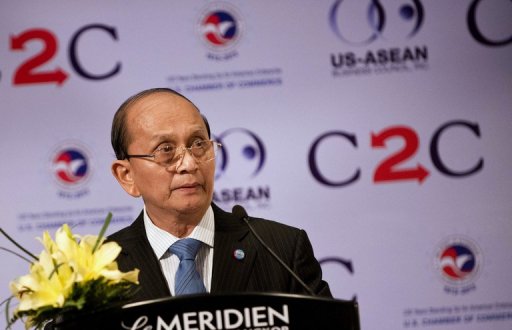 Yangon (AFP) — Myanmar President Thein Sein is striving to put his flagging reform agenda back on track by promoting loyal allies in the first major cabinet reshuffle of the post-junta era, analysts say.

The long-awaited shake-up, announced late on Monday, follows signs of tensions between reformist members of the quasi-civilian government and conservatives opposed to rapid political change in the former pariah state.

Thein Sein brought four of his key ministers into the president’s office in what his aides said was a bid to speed up the decision-making process, particularly on key issues such as the economy and resolving ethnic conflicts.

“The concentration of reform-minded ministers at the president’s office is an indication that he’s reinforcing his drive for a second wave of reforms,” said Aung Naing Oo, a Myanmar expert at the Vahu Development Institute.

“By surrounding himself with people close to him and loyal former army officers, he’s created a kind of mini-cabinet within a wider government,” said Renaud Egreteau, assistant professor at the University of Hong Kong.

“That should allow him to pursue the reform drive, notably on the ongoing economic and ethnic issues.”

Since taking office last year, Thein Sein has overseen a number of dramatic changes such as the release of hundreds of political prisoners and the election of opposition leader Aung San Suu Kyi to parliament.

But progress has been slower on the legislative front, in part because of a power struggle between the presidency and the parliament, observers say.

In June Thein Sein vowed to put the economy at the centre of his next wave of reforms, setting a target of annual economic growth of 7.7 percent over the next five years by attracting investment from overseas.

Experts said the move to centralise power in his government aimed to speed up the introduction of stalled legislation such as the foreign investment law, seen as crucial to attracting international firms to the impoverished nation.

“The president’s circling the wagons and perhaps saying the reforms will continue even though we can see areas of resistance,” said Sean Turnell, a Myanmar expert at Macquarie University in Sydney.

He said there had been “a bit of backsliding and resistance to reform”, particularly on the foreign investment law, elements of which have faced opposition from the regime’s traditional business cronies.

One prominent hardliner who was sidelined in the reshuffle was Kyaw Hsan, the long-time information minister with close links to ex-junta chief Than Shwe. He was moved to the lower profile role of minister of cooperatives.

Outgoing labour minister Aung Kyi — Suu Kyi’s official liaison while under house arrest — will replace him, a choice that was welcomed by the opposition.

“Information Minister U Aung Kyi is an outspoken person. So I think he’s a suitable person for the information ministry,” said Ohn Kyaing, a parliamentarian with Suu Kyi’s National League for Democracy (NLD) party.

“Aung Kyi and our chairperson Aung San Suu Kyi have good relations. As the information ministry is an important one, I see good potential,” he said.

The reshuffle came a week after Myanmar said it had abolished pre-publication press censorship that was a hallmark of life under the generals who ran the country for almost half a century until last year.

Information ministry insiders, however, were more cautious about the prospect for dramatic change, despite the departure of the man who for a decade oversaw the regime’s tight control over the press.

“They are the same. They are retired military officials. We cannot tell who is more hardline,” an information ministry official who did not want to be named told AFP.

The reshuffle also brought a number of civilians into the cabinet, including one key economic adviser, in what observers saw as another sign of growing political openness.

“As we can see some new faces, we can assume that it’s a part of the reforms,” said Khin Maung Swe, chairman of the National Democratic Force, an opposition party formed by breakaway former members of Suu Kyi’s NLD.