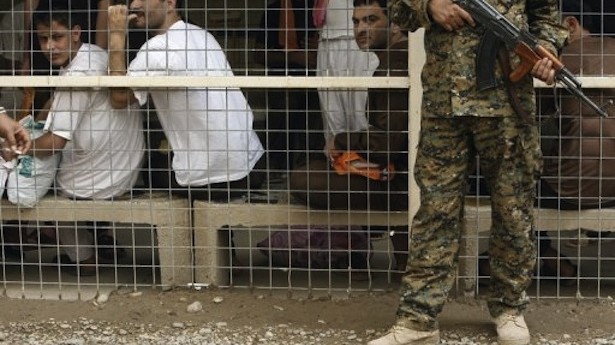 On Tuesday morning AFP received a text message from Haidar al-Saadi reading “the justice ministry carried out 21 executions against those condemned of terrorist charges, including three women terrorists.”

Such is the secrecy surrounding recent trials and executions of groups of prisoners in Iraq facing “crimes of terrorism.”

However HRW reported that in the first two months of the year, Iraq was averaging more than one execution per day.

More recently, at the end of July, Amnesty International reported Iraq has sentenced a further 196 prisoners to death. At the time of their report, they said 70 executions had been carried out this year.

The UN’s Special Rapporteur on arbitrary executions, Christof Heyns, condemned the sentencing, pointing to a “regrettable pattern of lack of transparency” in the trials.

“A large number of executions, at the same time, is not unprecedented in Iraq,” Joe Stork HRW’s Deputy Director for the Middle East and North Africa told the Daily News Egypt. “We know that often these people have been in custody for a good long while, we do have questions about whether these people are getting a fair trial, and we know that torture is a huge issue in Iraq.”

An anti-death penalty activist in Baghdad, who did not want to be named for fear of reprisals, said he does not necessarily have a moral issue with the death penalty but challenges the way it is being used in Iraq.

“The problem is not the execution,” the activist said. “It is that they were innocent. People are arrested randomly, then tortured until they admit responsibility for attacks or bombings that they didn’t do. It’s done on a sectarian basis.”

“There is nothing unique about the Iraqi system,” the President of the Iraqi Center for Human Rights and Democracy Studies Mohammed el-Shemmary said. When the death penalty is handed down as a verdict, “they usually postpone it; usually end up giving a life sentence. But these executions right now are all for terrorism related crimes.”

And with terrorism the rules change.

In Iraq, the law defining terrorism is exceedingly broad. It includes, “every criminal act committed by an individual or an organised group that targets an individual or a group of individuals or groups or official or unofficial institutions and causes damage to public or private properties, with the aim of disturbing the peace, stability, and national unity or of bringing about horror and fear among people and creating chaos to achieve terrorist goals.”

The death sentence is mandatory for any of these offences.

The law also states that anyone who helps plan or finance the above activities, “shall face the same penalty as the main perpetrator.”

This wording casts a wide net, and so far this year, many Iraqis have been caught.