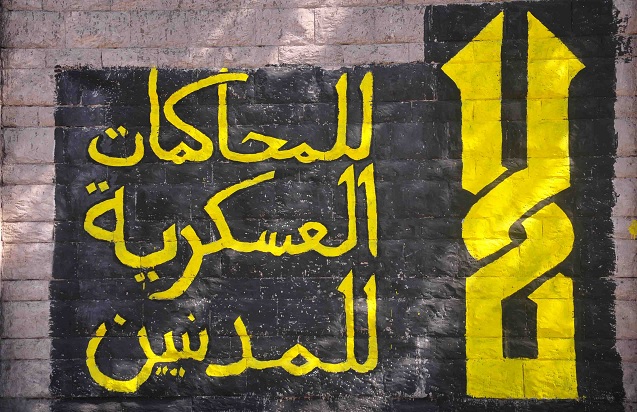 Could you give us a brief background of the No Military Trials for Civlians group?

The group No Military Trials for Civilians began in February 2011, following the violent break-up of the sit-in that was taking place by the Cabinet building in downtown Cairo next to Tahrir Square on 25 February. As a result, a young man named Amr Al-Behairy was arrested by the Military Police and taken away. We found out that he was interrogated by the military prosecution and sentenced to five years, with the charge of offending, assaulting and attacking military officers. At that time, we were not aware that military trials were taking place against civilians, and we were not able to provide legal assistance. Even his family was not able to see him until after the judgment had been issued.

As a result, we, as a group of voluntary activists, decided to found this group. We started campaigning for all civilians who have been arrested since the beginning of the revolution. Especially in the first couple of months from February up to May, large numbers were arrested because of the lack of police presence.

How do you assess the current situation with regards to military trials?

We have campaigned very hard, and we have a lot of public figures supporting our campaign. We had most of the presidential candidates supporting our cause. We had positive feedback from the military who said they will stop trying civilians before military courts except for cases that involve the use of force.

We defended cases from the recent events in Al-Abbasiya where 320 people were arrested. At the end almost 225 faced trial, and judgments have been issued. About 65 were found guilty. Some of them are serving time, and some of them, who were released during the course of the trial, have been now given a three-month sentence. In Suez several youths were arrested at the same time as the Al-Abbasiya incidents in Cairo. Seven of them were given a six month sentence, and one of them a three year sentence.

Military trials are still taking place, especially involving activists or young people who believe in peaceful protest. We also found out today that three employees of the Ministry of State for Military Production have been transferred to military prosecution for interrogation because they had participated in a sit-in at their place of work. So these trials are still continuing against workers, activists and those who demand their rights. They are still seen as a means of preventing freedom of expression.

What do you think of President Morsy’s recent decision to release 572 prisoners?

We take issue with the committee convened by President Morsy to review cases civilians tried by military courts, because the President actually already had the power to issue this pardon. In fact he has used these powers to pardon many of those who belong to Islamist groups who took part in terrorist acts in the 1980s and 1990s.

We ask why Khalid Aboul-Yazid, who received a six month sentence after protesting in front of the Saudi Embassy following the Ahmed Al-Gizawi trial, has not been yet released. Many cases that we have advocated for, involve people who have not committed violence or caused harm to anyone or in any way damaged property. They have been taken purely for political reasons or for the fact that they were at these events. It is unclear why these people have not been pardoned while those who committed atrocious crimes during the Mubarak era have been.

What other activities does your organisation take part in, beyond campaigning against military trials?

We help the families of detainees bring their case to the media. There are people who, without us, would not have access to the media. We also take donated food and clothes to prisoners. Some of us have joined another group called the ‘Front for the Defence of Egyptian Protesters’ which has been around since before the revolution. We have a very large network that works on several levels, either by providing food, helping with legal appeals or media campaigning to get the desired level of public support.

What are the criteria by which you choose to defend detainees in military prosecutions?

When someone calls to say that he or she is facing military prosecution, we go. Many cases have been for people who were not at all politically active in any way. We work on any case that we are made aware of.

After the transfer of power to President Morsy, is it still considered a risk to criticise the military?

Yes, I think it will always be a taboo, and they will always use articles in the Military Traditional Law that allow civilians to be tried before military judges. Anyone who attacked, insulted or offended an officer will face trial. In the Al-Abbasiya case, a lot of witness statements against those detained said they were chanting, ‘down with military rule!’ It is definitely still there.

How well do you see a proper transition of power? Does the military still hold power indirectly despite Morsy’s presidential success?

When Morsy came to power there was definitely a deal made about division of power and authority between Morsy and the Supreme Council of Armed Forces. The military will still retain its power, and I do not think it is going to dissolve. I do not think that Morsy can manage to lead the country without the presence and support of the military.