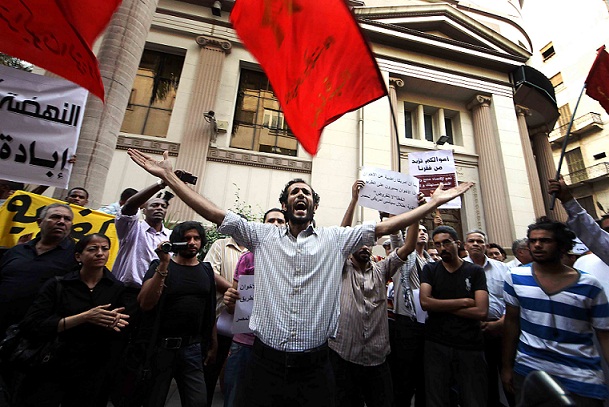 Activists took to the streets of downtown Cairo on Wednesday, in objection to the possibility of Egypt taking out a loan from the International Monetary Fund (IMF).

The march was called for by the Mina Danial Movement, named after a young activist killed during last year’s Maspero massacre. It also included activists from the revolutionary Socialists, the Socialist Popular Alliance Party, the Communist Party of Egypt, and the Egyptian Socialist Party, as well as other groups. It started on Wednesday afternoon, when activists met in front of the stock market building and marched to the Cabinet building where Prime Minister Hisham Qandil was holding negotiations with a delegation from the IMF, according to a statement by the Mina Danial Movement.

The statement added that the fight against this loan is not temporary and that it is a matter of life and death. The group added “we reject the loan through all peaceful methods as we are a generation that refuses having Americans and foreigners dictate conditions and policies to us.”

The group added that policies of accepting international loans, have left people in Egypt impoverished and deprived of basic rights like housing, education, employment, and medical care in the past, and this in turn is what led people to revolt.

The aim of Wednesday’s march, the group added, is not only to reject the loan, but also to demand the creation of a committee, which includes economic experts, that can find an alternative to current borrowing policies in Egypt and a way to restructure the economy.

This protest comes on the heels of the IMF managing director, Christine Lagarde’s visit to Cairo, earlier this month, in which she met with President Mohamed Morsy and top officials.

According to the IMF’s website, Egypt requested a $ 4.8 billion loan. Lagarde said “we are responding quickly to this request,” adding that the IMF is willing to help Egypt. A technical team is set to arrive in Egypt next month to hold more talks on the possibility of offering support to the financially challenged country.

Lagarde added in the statement that Egypt is facing several challenges, including the need to create job opportunities, support small and medium-sized enterprises, and overcome budget deficits.