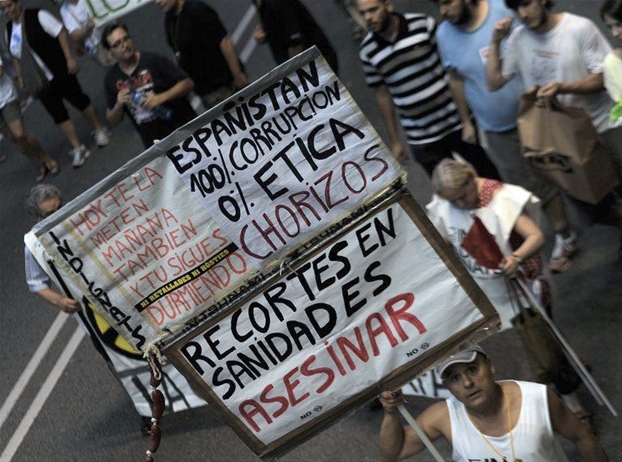 The northeastern region’s government, facing huge repayments on its 40-billion-euro debt, said it would tap an 18-billion-euro liquidity fund set up by Madrid to finance troubled regions.

“The government has decided to request participation in the liquidity fund,” Catalan government spokesman Francesc Homs told a news conference.

But the region, responsible for one-fifth of Spanish economic output and in open conflict with Madrid over its deficit-cutting demands, would do so “without accepting political conditions,” he said.

Spanish Prime Minister Mariano Rajoy said the central government would help Catalonia, “as we help the rest of the regions.”

“The regions are also Spain so the Spanish government will not wash its hands of the regions,” Rajoy told a news conference.

Rajoy’s conservative government snatched a 100-billion-euro eurozone rescue loan in June to salvage the balance sheets of its banks.

But analysts believe Spain’s high borrowing costs will still force it to seek a sovereign bailout before a repayment crunch in October when more than 30 billion euros in debt payments are due.

The Spanish government has called on the ECB to come to its aid by resuming its programme of purchasing government bonds.

But the ECB is expected to act only if Madrid accepts new conditions by formally applying to the eurozone bailout funds, the European Financial Stability Facility and its successor the European Stability Mechanism.

The prospect of ECB intervention drove down Spain’s short-term borrowing costs as the Treasury raised 3.6 billion euros ($4.8 billion) on Tuesday, luring solid interest on the market.

Latest data showed Spain was engulfed in a deepening recession that has barely released its jobs-killing grip since a global economic crisis and property crash struck in 2008.

On a quarterly basis, the economy shrank by 0.4 percent in the second quarter of 2012, building on a 0.3-percent slump in the first quarter, the National Statistics Office report said.

Newly revised figures also showed that Spain has barely escaped recession since mid-2008, when a property crash cast millions out of work and left Spanish banks with piles of bad debts.

Spain is still reeling from that calamity, with jobless rate of nearly 25 percent.

European Union president Herman Van Rompuy, in Madrid to discuss the eurozone crisis with Rajoy, said the Spanish government would have to choose whether it needs broader help.

“But if financial markets defiance persists during this period of adjustment, European leaders have stated during the June European Council their readiness to assist the Spanish authorities further,” he said.

Van Rompuy said the banking sector shakeup would be important.

“I am confident that the ongoing financial sector restructuring, if implemented fully, rapidly and thoroughly, will shed complete clarity on the situation of the banking system, restore confidence, stimulate the Spanish economy and eventually reduce the risks weighing on Spanish taxpayers.”

Catalonia’s debt, the highest of the 17 regional governments, is emblematic of Spain’s financial woes, though Valencia and Murcia have already said they, too, will need central government help.

Catalonia, whose capital is Barcelona, suspended subsidies in July to hospitals, old age homes and other social services.

It has cut public sector wages, introduced a charge for medical prescriptions and frozen infrastructure investments.

This year, Catalonia’s debt repayments amount to 13.5 billion euros, with 5.8 billion euros to be paid in the second half of 2012, regional government figures show.