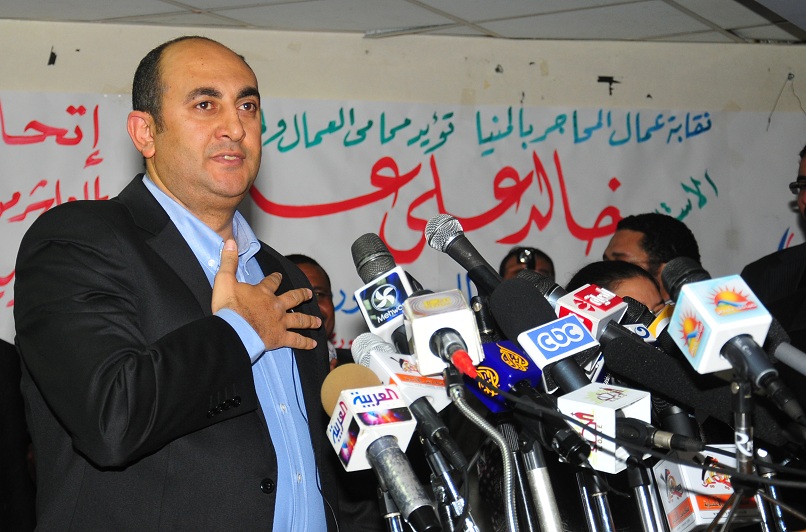 Khaled Ali the former presidential candidate, lawyer, and president of Egyptian Center for Social and Economic Rights, has filed a law suit at the Administrative Judiciary Court against President Mohamed Morsy and prime minister Hisham Qandil, to oblige them to reveal information on the terms and nature of the IMF loan that is currently being negotiated, reported Shorouk News.

Ali said in a phone conversation with the “Akher Al Nahar” program on the Al-Nahar television channel that parties from the right, left, and center suggested alternatives for the loan but the government is insisting on taking it, Al-Dostor newspaper reported.

On his Twitter account, Ali said “the era of agreements with secret terms has ended; the presidency should announce the complete terms of the IMF loan and hold a referendum to get people’s opinion because the people are the only ones who pay the price.”

In the lawsuit, Ali said that according to the Fund’s objectives, the conditions will be about increasing revenue by reducing the subsidies on hydrocarbons “gasoline, diesel, and other”, reducing the amount of money allocated for government appointments, as well as raising taxes and prices of government goods. Article 5 of the founding treaty of the IMF stresses the importance of “the availability of guarantees provided by the borrowing country to the source of borrowing after the agreement with the IMF, while devoting a certain economic policy for the treatment of the deficit in the balance of payments.”

Ali also criticized the agreement’s violation of article 37 of the constitutional declaration that requires taking the Shura Council’s opinion in the draft general plan for social and economic development, which did not happen with the IMF loan.

He also stressed the people’s right to know, referring to previous “bad” experiences some countries like Ukraine, Spain, Greece and Romania had had with IMF loans. Experiences that led to economic and political deterioration in those countries, reported Shorouk News.

Egypt had requested formally a $ 4.8 billion loan from the IMF, which announced its willingness to help the financially challenged country to create job opportunities, support small and medium-sized enterprises, and overcome budget deficits.