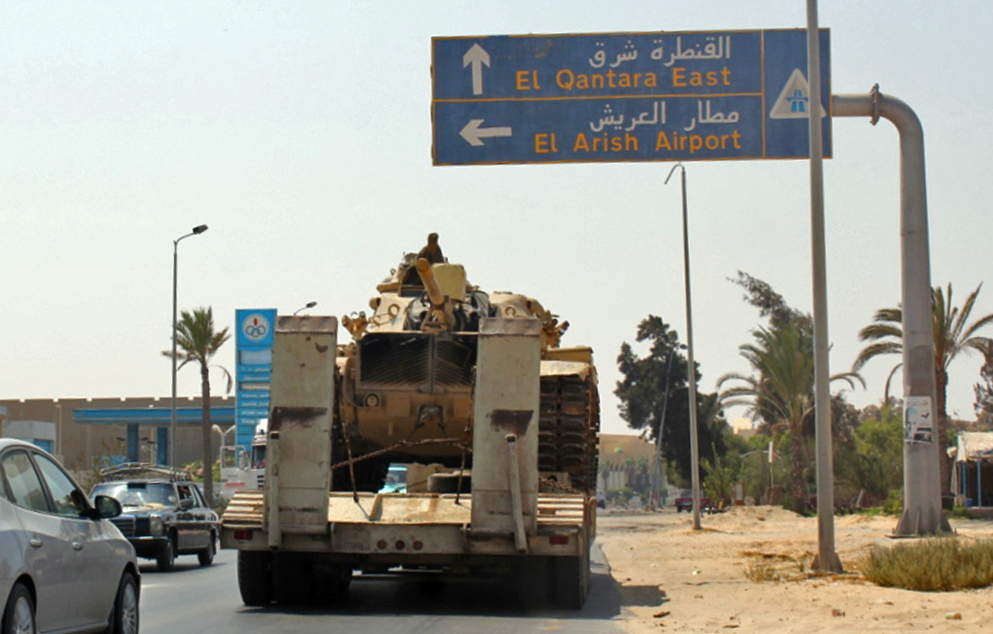 Against reports of a gradual withdrawal of troops from Sinai, the arrest of a top Sinai militant involved in the recent cross-border attacks suggests that Operation Eagle is ongoing.

Hamada Abu Shita, sentenced to death in absentia by the Ismailia supreme state security court two weeks ago for involvement in recent attacks near the Rafah border which killed 16 Egyptians security personnel, was arrested early Saturday when eight tanks surrounded his home.

“He is accused of complicity in all the violent crimes committed in Sinai recently,” north Sinai Bedouin activist Ahmad Abu Thera’ said of Abu Shita, describing him as the most important figure in Sinai responsible for inciting insecurity.

Abu Shita was first arrested following terrorist attacks in Taba in 2004 and in Sharm el-Sheikh in 2005, according to a north Sinai activist who preferred to remain anonymous. Abu Shita was also sentenced to death in absentia last year after being convicted of breaking into a police station in Al-Arish.

His arrest shows that operation Eagle is ongoing, according to the activist. “This is merely a change in the operation’s tactics, not an end to the operation altogether.”

Abu Thera’ said the army is gradually withdrawing from Zone C, the area near the Rafah border where Egyptian military presence is most restricted by the Camp David accords. Following August’s attack, the army increased its presence in Sinai in order to carry out operation Eagle.

However the army’s withdrawal does not necessarily spell the end of Operation Eagle, Abu Thera’ said. “Operation Eagle is not connected to the number of tanks inside zone C.”

Another North Sinai activist, Khaled Arafat, who claimed to have seen tanks leaving Al-Arish, said the withdrawal had negatively impacted security in the area.

“Operation Eagle has failed to achieve security in Sinai; in fact, it ended up increasing violence,” Arafat said.

Meanwhile, the Ansar Bait Al-Maqdis (Jerusalem supporters) jihadist movement claimed responsibility for the killing of a man, Meneisal Mohamed Soliman, who was found decapitated on Friday. According to its statement, the movement claimed Soliman was working with Israeli spies and was responsible for the killing of a Bedouin jihadist Ibrahim Owida Nasser Madan who was killed in mysterious circumstances last Sunday.

The movement claimed Soliman had planted a landmine on the road to Madan’s home, whereas reports by CNN suggested that he might have been hit by an Israeli drone strike.