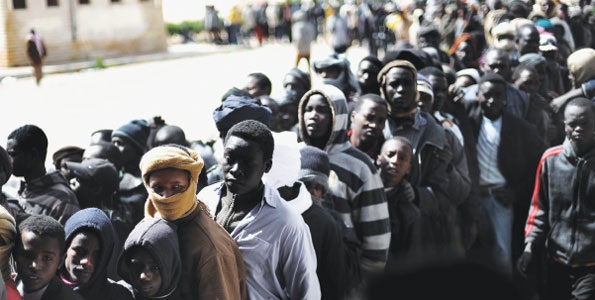 Between 50-100 refugees at Al-Salloum refugee camp protested in front of the United Nations High Commissioner for Refugees (UNHCR) office at the camp last week demanding steps be taken to speed up their resettlement outside Egypt. Protests began on Tuesday and continued through Thursday.

Around 1600 Sudanese and East African refugees have been living at the UNHCR administered camp since they fled violence during Libya’s civil war. The camp is located in the desert between the Libyan border and Egypt’s Al-Salloum border post.

Camp residents are not allowed to legally enter Egypt but fear racial discrimination if they return to Libya. Many of the camp’s inhabitants previously fled to Libya from Darfur to escape ethnic persecution in Sudan. The camp’s residents are now seeking resettlement in the West.

The protesters appealed to resettlement countries, led by the United States, to direct more administrative attention to their predicament and expedite their resettlement process. They demanded the Egyptian government cooperate with the international community to facilitate resettlement and end obstruction of NGOs which want to publicise the situation in the camp.

Additionally, they demanded rights for the roughly 120 people who have arrived at the camp since October last year when refugee resettlement registration closed. Despite repeated attempts, they have been unable to begin the process required to leave the camp.

Life in the makeshift and exposed desert camp is challenging. Camp resident Gamal Al-Fadil left Sudan and was working in Libya before arriving at the camp. “People here suffer from many different things, they suffer from security problems, health problems, even nutritional problems,” he said.

“On the security front, we are on the border… there are clashes between the government and smugglers.” Two months ago three camp residents were injured by stray bullets.

“There is only a small [health] centre but it is limited, it is not enough,” Al-Fadil said. Residents try to travel to nearby towns for more serious medical treatment. “The procedures for travel are very challenging, and we do not get enough money from the UN to afford it.”
The hardship of life at the camp at the camp pushed residents to demand a resolution to the legal and geographic limbo which has left them living between countries for one and a half years.

A new facility at the site to which the refugees will be moved is being built but many fear that this only means their state of limbo will be prolonged.

According to Al-Fadil, the UNHCR says they are doing all they can, and they can’t control the speed that countries process asylum, but the agency’s website shows plans to close the camp at the end of the year. “It would be good if the camp closes by the end of this year, people here will be able to bear that, but afterwards I don’t think they will be able to bear the situation.”