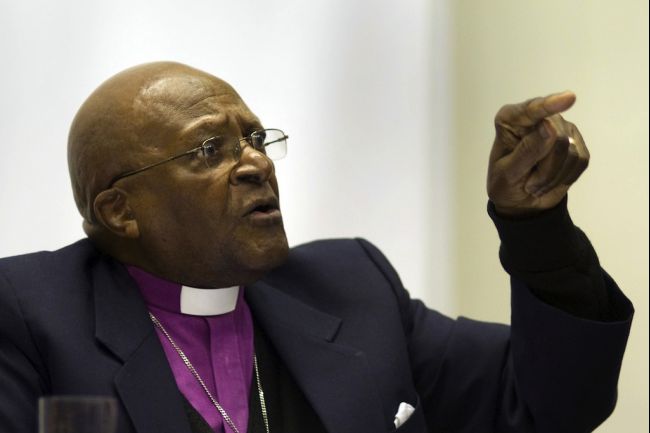 Prominent South African human rights activist Desmond Tutu has argued for George W Bush and Tony Blair to be tried by the International Criminal Court (ICC) in The Hague for using the false pretense of weapons of mass destruction (WMDs) to justify the war in Iraq.

Writing in an opinion piece for the British newspaper the Guardian, the Nobel Peace Prize winner  said the former leaders of the United States and United Kingdom had fabricated evidence of WMDs.

“The immorality of the United States and Great Britain’s decision to invade Iraq in 2003, premised on the lie that Iraq possessed weapons of mass destruction, has destabilised and polarised the world to a greater extent than any other conflict in history,” Tutu said. He compared their actions to that of playground bullies. “They have driven us to the edge of a precipice where we now stand – with the spectre of Syria and Iran before us.”

The article, published on Sunday, comes days after Tutu cancelled his appearance at the Discovery Invest Leadership (DIL) summit in South Africa because Blair would attend.

The grounds for which Blair could be tried in the ICC would rest on the fact that there was no legal authorisation from the UN Security Council to invade Iraq. According to a leaked 2002 Downing Street Memo, both government knew their case for an invasion of Iraq was thin but Bush was determined to remove Saddam Hussein “through military action, justified by the conjunction of terrorism and WMD.”

Bush could not be tried by the ICC however, on the grounds that the US has not signed the 2002 Rome statute which recognises the authority of the ICC to try signatory nations.

The invasion of Iraq in 2003 and the subsequent occupation led to the collapse of Iraq’s economy and infrastructure, the breakdown of social order through the massive rise of militant Islamist groups, and the deaths of over 100,000 civilians according to the Iraqi Body Count Project (IBCP).

Tutu points at the statistics presented by the IBCP as sufficient grounds for investigation. “In a consistent world, those responsible for this suffering and loss of life should be treading the same path as some of their African and Asian peers who have been made to answer for their actions in The Hague.”

During the DIL Summit Blair defended his position on the Iraq war, saying he made his decision based on the intelligence available at the time. “I have never regretted the removal of Saddam Hussein, who caused the deaths of thousands of people with chemical attacks and in the seven year war with Iran that cost a million lives. We know Saddam had chemical weapons and was working on nuclear weapons.” Blair subtly criticised Tutu by saying that leaders needed to be openminded and not think of themselves as morally superior.

Tutu argued in his article that leadership and morality were indivisible. “Good leaders are the custodians of morality. The question is not whether Saddam Hussein was good or bad or how many of his people he massacred. The point is that Mr Bush and Mr Blair should not have allowed themselves to stoop to his immoral level.”