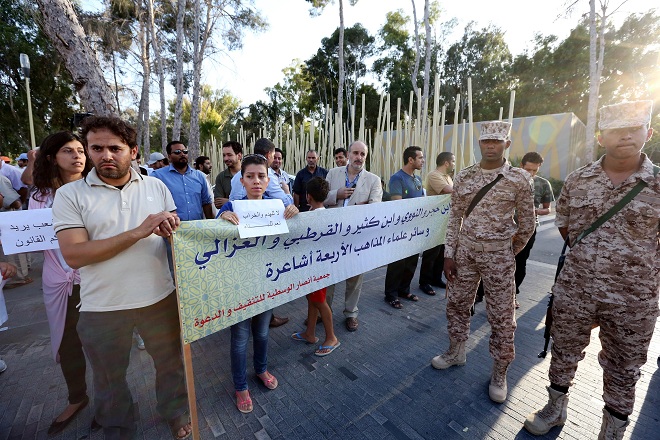 Following three attacks on Sufi shrines in Libya, the NGO Human Right’s Watch (HRW) has issued a statement accusing the Ministry of the Interior of turning a blind eye to the violence, raising fears that the government is losing control of security forces.

The attacks, which included the demolition of Libya’s most revered Sufi mosque, took place in Tripoli and the nearby cities of Zliten and Misrata over the past fortnight. No one has been arrested in connection with the violence and on 28 August the Interior Minister, Fawzi Abdelal, issued a statement refusing to use force against the Islamist groups committing the attacks, sparking widespread condemnation.

“The government has failed both to protect sites sacred to Libyan Muslims who follow Sufi practices and to arrest those who have destroyed the tombs,” Eric Goldstein, deputy Middle East and North Africa director at Human Rights Watch told the Libyan Herald. “A government should not, in the name of avoiding clashes, give a carte blanche to the forces of violent intolerance.”

The events have caused many to doubt the ability of the weak Libyan transitional government to control increasingly powerful Islamist groups within their ranks. The Wall Street Journal has even reported that uniformed members of organisations affiliated with the security services barricaded the road to one of the Sufi shrines targeted in Tripoli, helping it to be demolished.

“We all knew there were Salafi groups in Libya and we thought they were marginal and that the government would be able to control them,” Claudia Grazzini, a Tripoli-based analyst for the International Crisis Group told the Financial Times. “What we’re seeing now is a problem in the chain of command in the security forces. You have official security forces under the authority of the government not responding to the orders of the deputy prime minister who called for the defence of these sites.”

Contrary to most people’s expectations, religious parties did surprisingly badly in Libya’s recent election, losing to secular and liberal candidates. Many in Libya suspiciously view Salafis as importing foreign norms from the Gulf. These events, however, could signal their growing military strength, a result of the power vacuum left after the revolution and the weakness of the government.