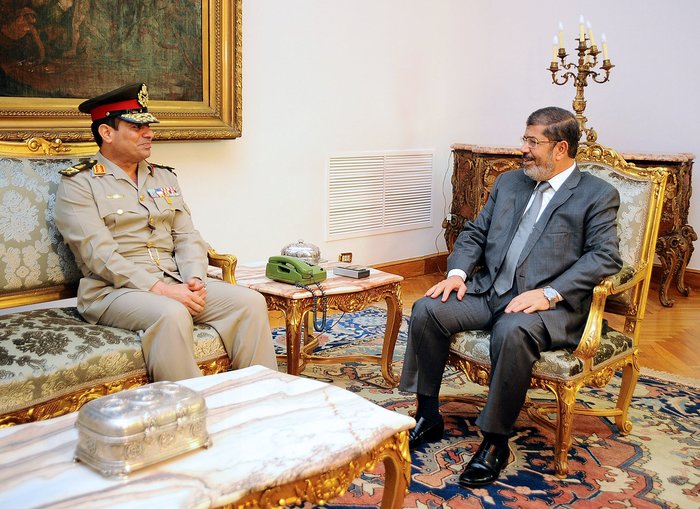 General Abd Al-Fatah Al-Sisi, newly-appointed Minister of Defence and Commander-in-Chief of the Armed Forces, confirmed on Monday the composition of the revised Supreme Council of the Armed Forces. The future role of the council still remains unclear.

Monday’s announcement solidifies the status of members of a body which, until the arrival of President Mohamed Morsy in June, held the highest level of power in Egyptian politics.

Amid speculation about the future powers of the president, it was announced Morsy will not be taking up the post previously occupied by the Mubarak-era general, Field Marshal Tantawi, leaving this post to Al-Sisi. Morsy will, however, retain overall command of the military, in the form of Supreme Commander of the Armed Forces.

Chief of Staff of the Armed Lieutenant General, Sedki Sobhi, will be Deputy Chairman.

The council will be composed of 18 of Egypt’s top military leaders:

The commanders of Egypt’s field armies:

The commanders of the main military zones:

The remaining members of the will council consist of:

Two of Field Marshal Hussein Tantawi’s former assistants have remained in their positions and will also have seats on the SCAF:

Al-Sisi has yet having yet to pick his own replacement as Director of Military Intelligence and Reconnaissance.

The formation of the new council comes two days after Al-Sisi sent about 70 generals from the military into retirement. Although suspected to be a move by the president to assert his authority over the military, the decision is now being described as due to nothing more than the expiration of the generals’ terms in the military.

SCAF has undergone a massive reshuffle following President Morsy’s decree on 12 August to send several high-ranking military leaders, including Tantawi and his Chief of Staff, Lieutenant General Sami Anan, to retirement. Shortly afterwards Al-Sisi was appointed as the new Minister of Defence and Military Production.

It is unclear what role SCAF will play in the Egyptian political scene from now on, with reports coming out of the Constituent Assembly indicating that the next constitution will give the president complete power over the military.

These reports suggest that the president will no longer be obliged to ask for the military leadership’s advice before declaring war and will not need its approval.

SCAF as an entity is not mentioned in the articles drafted by the Constituent Assembly’s System of Governance Committee. The draft constitutional articles refer instead to a National Defence Council, which will be made up of an equal number of civilian and military officials, and chaired by the president.