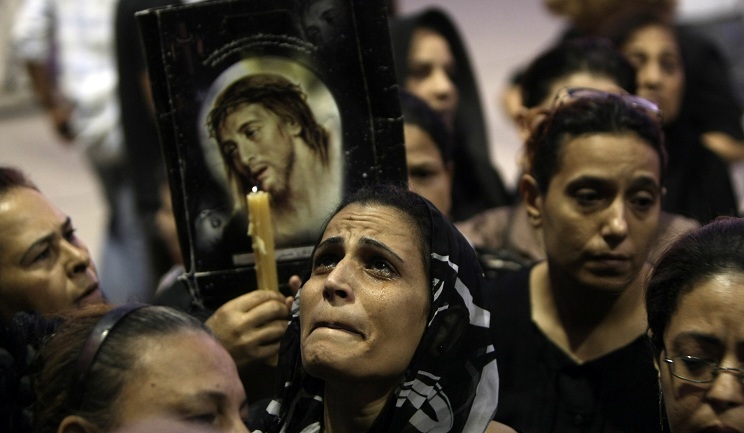 A criminal court in North Cairo has postponed the case against two Copts charged after the Maspero massacre, while Coptic activists accuse the state of double-standards towards the religious minority.

Judge Salah Rushdie postponed until 2 October the case against two Copts, Michael Adel and Michael Mosaad, who are charged with theft of a machine gun from the army during the massacre that killed 28 protesters and injured hundreds more in October 2011.

The court convened for only 15 minutes on Monday before the case was postponed due to the absence of witnesses schedule to testify.

The lawyer for the defendants, Tharwat Bekheet, told the court the case was another sad example of unfair treatment of Copts, pointing to the judicial system’s failure to bring to justice officers who took part in the killing of protesters.

Mina Magdy, spokesman for the Maspero Youth Union, echoed Bekheet’s sentiments. “Unfortunately, this is the continuation of discrimination against Copts in which the victims are judged, rather than the offenders,” he told the Daily News Egypt.

Magdy cited numerous incidents, including an incident in the village of Abu Qurqas in Menya in which a fight over a speed bump placed by Coptic lawyer Alaa Rushdy in front of his house in April 2011 escalated into sectarian violence. The fighting resulted in three deaths and a number of houses were burned in the process. Menya’s criminal court handed life sentences to 12 Copts, while acquitting eight Muslims. He also pointed at the government’s failure to bring to justice those who bombed the Saints Church in Alexandria on New Years Eve in 2011, which killed 23.

On 9 October 2011 a peaceful march from the Cairo neighborhood of Shobra ended at Maspero, where the army attacked them. They had been protesting the destruction of a church in Aswan by local extremists.

Sectarian tensions escalated most recently in the Giza village of Dahshur, when a fight between a Christian man and his Muslim customer resulted in roughly 120 Christian families fleeing their homes. Most of the families eventually returned and were compensated with EGP 10,000 per family and business looted in the aftermath.