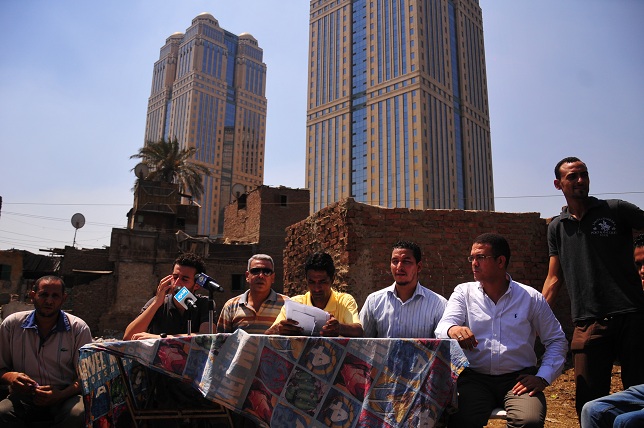 Ramlet Boulaq residents have demanded the government either modernise the area and elevate its status as a slum, by introducing utilities such as drinking water and sanitation, or otherwise have investors offer fair prices if they wish to buy the land.

The residents stated their demands in a press conference held Sunday by the Ramlet Boulaq Popular Committee with support from the “Living in Name Only” campaign organised by the Socialist Popular Alliance Party.

SPAP member Fady Mohamed started the proceedings. He announced that Ramlet Boulaq residents had formed a popular committee to represent them and demand their rights.

Popular Committee member Shaaban Ramadan said the Ramlet Boulaq area has been without proper utilities since 1918 and that it recently has had electricity installed but is still bereft of other utilities such as drinking water, the community has two sinks that distribute water to all houses, and sanitation.

“My father has a national ID card from the time of King Fouad and in the address field it says Ramlet Boulaq,” said Ramadan in a bid to prove that the current residents have been living in the area for over a hundred years and are thus its legal owners.

Another resident, Magdy Hassan Mohamed, told journalists the story of Anwar Abd Al-Latif, a fellow resident of Ramlet Boulaq who was shot in the leg by police on 2 August, the day violent clashes erupted between the residents and police.

Abd Al-Latif was shot before the violence started. He was shot by a tourism police officer as he was picking up the body of Amr Al-Bunni whom the same officer had shot dead following an argument.

Al-Bunni had entered one of the Nile City Towers to collect unissued wages, which he received from the management for protecting the towers since the 25 January 2011 uprising, when he got into an argument with the officer and was shot twice, once in the leg then fatally in the back.

Abd Al-Latif’s son, Ahmed, was also shot in the leg as he attempted to help his father up. Both now walk on crutches. Abd Al-Latif was arrested after the press conference on Sunday but was released less than two hours later.

Mohamed also spoke of his brother, Waleed, who was beaten by a police officer and arrested.

“I brought some food for my brother and the other Ramlet [Boulaq] residents in prison. The officer would not let me give it to them and told me I should get them poison instead,” he said.

Mohamed’s brother, Waleed, is one of dozens of Ramlet Boulaq residents who have been arbitrarily arrested since the 2 August events when some of the inhabitants attacked the towers after hearing of Al-Bunni’s killing. About 20 cars and 10 motorcycles were burned, but the young men regularly arrested ever since have not been proven to have partaken in the violence.

They are being sentenced to four days of temporary detention upon arrest and then the detention keeps getting renewed every 15 days.

“I have written to President Mohamed Morsy’s advisor for legal affairs, Mohamed Fouad Gad-Allah, and many human rights organisations, but no one has gotten back to me. I know it is because I am poor,” said Mohamed.

“The police have attacked us in the middle of the night, invaded the sanctity of our homes. They even took our money and savings,” he added referring to a police raid that took place early on 3 August before sunrise, hours after clashes had stopped.

According to Mohamed Adel, a lawyer with the Egyptian Centre for Economic and Social Rights, the arrests campaign in Ramlet Boulaq has been totally random.

“One man was arrested even though he does not even live or work in Ramlet Boulaq, he just happened to be passing through the area on his way home,” he said.

Adel produced a copy of the police file of Mohamed’s brother Waleed, one from 2011 and one from May 2012. Both showed that he had no criminal record whatsoever.

“Another man, Tarek, is a mechanic. He burnt his arm in an accident a month ago. They arrested him and said his arm was burned as he was throwing Molotov cocktails during the clashes,” added Adel.

“Another young boy, 14 years old, was made to stand facing a wall then slapped on the back of his neck. They broke four of his teeth.”
Popular Committee member Hamad Araby said he met with representatives from the Cairo governorate and the neighbourhood authorities.

“I gave them two options as part of our negotiations: either improve the area and give us water and sanitations, we will take care of the rest; or if you insist on removing us and having us sell our homes to investors then make sure they offer us fair prices,” he said.

The owners of Nile City Towers, and namely telecommunications tycoon billionaire Naguib Sawiris, have long tried to buy the land on which the Ramlet Boulaq residents live, mostly in narrow wooden shacks, as part of the tower’s expansion plan.

One square metre of the land is worth around EGP 36,000 but the most the residents have been offered is EGP 5,000 and some have even been convinced to sell at EGP 300 and 700.

On 20 July 2012 the Cairo governorate issued a decision for temporary seizure of the land for three years, which means the residents would be forcefully evicted and not provided proper compensation.

The decision has not been implemented yet and lawyers from the ECESR have appealed it.

“The state needs to stop favouring investors and realise that its citizens are more important than investors,” said Araby.
“Either make this area inhabitable or offer us fair prices to leave.”

Daily News Egypt has published an earlier investigation on the Nile City 2 August clashes and the land disputes in Ramlet Boulaq. Click here for more background information on this story.