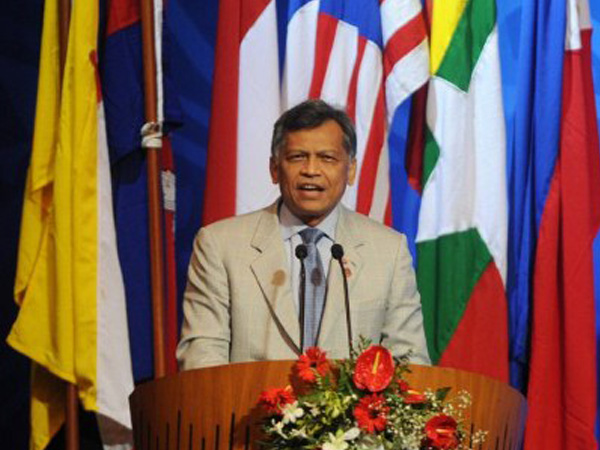 Cambodia (AFP) – Sixteen nations home to roughly half the world’s population have agreed “in principle” to create a free trade area spanning Asia, the secretary-general of ASEAN said Friday.

Trade ministers from the 10-member Association of Southeast Asian Nations (ASEAN) and their counterparts from China, Japan, South Korea, India, Australia and New Zealand will press their leaders to start talks on the trade zone at a regional summit in November, Surin Pitsuwan told AFP.

The move towards establishing the Regional Comprehensive Economic Partnership (RCEP), made during a meeting in the Cambodian tourist town of Siem Reap on Thursday, was hailed by Surin as “a big achievement”.

The proposal could transform the region — containing around 3.5 billion people — into an integrated market with a combined Gross Domestic Product (GDP) of $23 trillion, a third of the world’s current annual GDP, he said.

“This idea of trying to string together all these FTAs in existence into one, in principle now it’s been agreed,” Surin said on the final day of a week-long gathering of ASEAN economic ministers.

The pact will aim to eliminate trade barriers, create a liberal investment environment and protect intellectual property rights, according to the negotiation guidelines.

“This is a bold move to deepen integration in the most dynamic region in the world,” New Zealand Trade Minister Tim Groser said in a statement on his government’s website.

“It shows that despite the economic difficulties in other parts of the world, Asia is actively pursuing trade liberalisation.”
Progress on the proposed RCEP trade deal, where China will be a dominant power, comes as the United States is leading a push to create a vast trans-Pacific pact with at least 10 other economies, including four ASEAN members.

The Trans-Pacific Partnership (TPP) has emerged as a trade priority for US President Barack Obama, who has cast the mooted pact as a way to boost US exports and jobs while preserving labour and environmental standards.

US Trade Representative Ron Kirk, who attended this week’s trade talks in Cambodia, said there was room for both trade initiatives.
“We seem them as complementary, not necessar