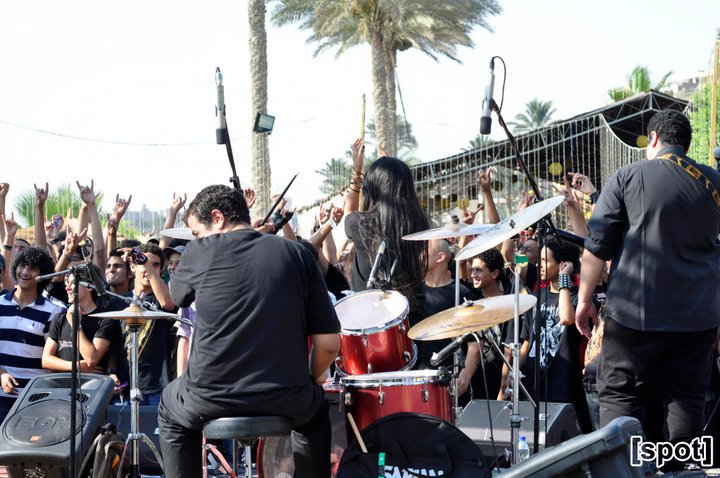 The heavy metal community in Cairo received an unpleasant shock this week when a prominent lawyer of the FJP filed a complaint against El Sawy Culture Wheel for allegedly hosting devil worshippers, though not on behalf of the MB or the FJP according to FJP sources. It was time to tie up the long hair, put down the screeching guitars, and turn down the volume to take stock of what this exactly means for heavy metal in Egypt.

Wael Osama, founder and manager of heavy metal band Enraged remembers how after the crackdown in the mid 90s, the metal scene in Egypt became silent, and stayed that way for a long time. “When we started playing in 2005 we did not experience a lot of trouble,” Osama said, “for the simple reason that we avoided giving concerts. The metal bands in Egypt would still perform in a few venues in the suburbs of Cairo and Alexandria, but never on the more mainstream stages.” Heavy metal aficionados were a secret club onto themselves, publicising concerts through word of mouth and basic flyers, surreptitiously given to those in the know.

Even if heavy metal has become more common in Egypt over the years, with regular concerts scheduled in places as the El Sawy Culture Wheel, Osama feels that as a musical genre, the scene has not done enough to reach a bigger audience. “As the heavy metal scene in Egypt as whole we have not taken enough advantage of the new media tools available to us to really push our music into the mainstream. At gigs you see the same faces of the loyal fans, and their number has not increased very much over the years. It does not stop us from playing though, we love what we do and we are stubborn,” he concluded laughing.

Sherif Saleh, host of the heavy metal internet radio show Mosh Pit Maniacs agrees. “Metalheads are very keen on their music, appearance and music gear (if they are musicians).” He continued to explain that the love for the music brings people together, no matter what their religion. Saleh’s show airs once a week and draws listeners from Egypt, the Gulf, and abroad. “So far, since the launching of the show in April 2011, I have not received any negative reactions. When the online radio’s listeners do not like what they are listening to, they just turn it off.”

Osama seems upbeat and laughs during our conversation, yet this does not mean he thinks the resurfacing of the devil worship accusations are meaningless. “I was expecting that something like this could happen in the future, but I did not think it would be this soon. No matter how absurd the accusations are, the fact they are brought by a well known lawyer from the FJP will generate a big amount of bad publicity with possible serious repercussions.”

Saleh is also not surprised that this has happened. “As the Muslim Brotherhood is politically taking over the country, I expected to start witnessing media attacks against heavy metal music in Egypt.” He goes on to explain that metal music has received resistance in most countries of the world, but that over time people have learned to understand it.

Osama posted a reaction on Enraged’s Facebook page and a short video on Youtube as a first response and has been contacting fellow metal musicians to organise a meeting within the next day or so. “I think we need to get together and come up with a plan of how to explain what heavy metal music is, who the people that play it, and who their audiences are.”

Heba Ahmed, the media coordinator of El Sawy Culture Wheel confirmed that nothing untoward had taken place during the concert and that no changes will be made to the programming. “El Sawy will host another metal concert this week,” she concluded.

Saleh said “Unfortunately there is not much to be done, heavy metal communities have always been a minority everywhere. But they are harmless. At the end of the day, music is a lifestyle; it has nothing to do with spirituality or even politics.”

Osama concluded, “there is a chance that there can be violent repercussions to this story but I think the worst thing we could do is shy away from publicity. The Egyptian community should know we are normal people who have a love for a certain type of music, and that is it. I am a teacher and at my school everyone knows I play in a metal band. Up to this moment that has not been a problem and I hope that by speaking out and explain what we are all about it will stay that way.”