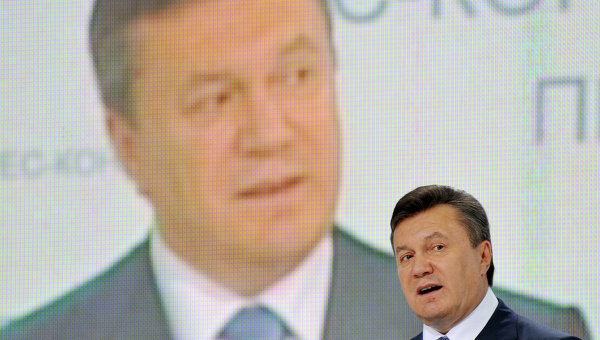 A speech by the Ukranian president, Viktor Yanukovich, was interrupted by a silent protest during Ukraine’s World Newspaper Congress in Kiev on Monday.  Yanukovich was praising Ukraine’s progress towards media freedom when around a dozen journalists in the audience stood up holding posters with slogans such as “Stop Censorship.” Security guards then forcibly removed the banners.

During the conference Yanukovich had highlighted Ukraine’s progression from near total media censorship under Soviet control to an open society, a point of view disputed by the protesters and various political figures in Europe who have heavily criticised the president’s media policy since he came to power in 2010.

The protest was in response to a raid by tax police of TVi, Ukraine’s only independent TV station, in July for its criticisms of the government. The police were looking to arrest the station’s chief executive for tax evasion, charges have since been dropped. According to Reuters, TVi has claimed that local cable companies are either dropping the station or moving the them to more expensive viewing packages, and thus reducing their viewer base.

Reporters Without Borders (RSF) reported in June 2010 that the TVi news station had been under surveillance. According to the RSF report, a video shot by one of the journalists at the station suggested the government’s security agency, SBU, had been monitoring TVi employees from the parking lot in a car with false license plates. The footage shows three individuals in the vehicle covering their faces and refusing to answer questions before driving off through a red light.“[RSF] condemns this kind of harassment, which is unworthy of a country such as Ukraine,” the report read.

In October 2011 a Kiev court sentenced Yulia Tymoshenko; former prime minister, presidential hopeful, and staunch opponent of Yanukovich; to seven years in prison for exceeding her powers as prime minister by signing a ten year gas deal with Russia.  Her trial was widely criticized by the EU and US as being the selective prosecution of political opponents.

More recently, RSF released a statement addressed to the members of Ukraine’s parliament, expressing their concern over a new draft law which would criminalise defamation. According to RSF, the penalties for defamation proposed in the law include a fine “between 500 and 1,500 times the minimum wage of the individual concerned” or up to two years of community service work. If the individual is found guilty they could face a suspension of between one and three years on “occupying certain positions or carrying out certain activities.”