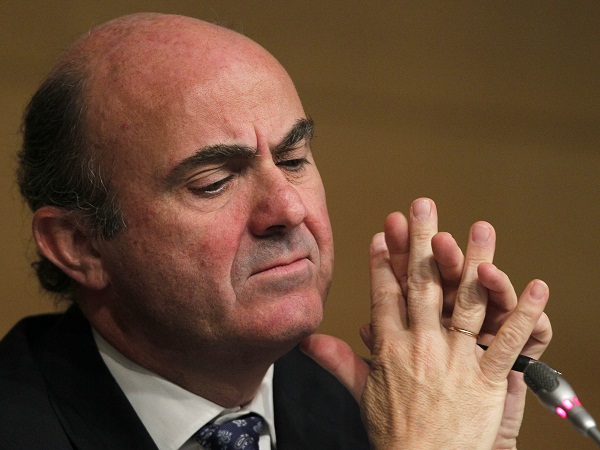 Madrid (AFP) – Spain’s economic chief said on Monday he expects the European Central Bank will intervene over the euro crisis, which has put Madrid on the brink of seeking a sovereign bailout.

Spain has made it clear it wants the ECB to help curb spiralling borrowing costs, which it says are impossible to sustain and are thwarting all efforts to rein in a runaway public deficit.

Economy Minister Luis de Guindos spoke three days ahead of an ECB meeting that is expected to give details of how the bank could buy up the sovereign bonds of its most fragile member states.

“I think the ECB knows perfectly well what the problem is with the euro and that it will act in consequence,” De Guindos told Onda Cero radio.

In early August, the ECB suggested it could start unlimited buying of stricken member states’ bonds to drive down their crippling borrowing costs.

The ECB is due to give further details of the new measures on September 6 in Frankfurt after the monthly meeting of the bank’s governors.

It has already indicated that Spain would have to make an official request for help from eurozone bailout funds, submitting to their strict conditions, in return for any bond-buying programme.

De Guindos vowed that Spain would not relax in its deficit-cutting battle if it received aid from the ECB.

Spain was determined to fulfill its promise to cut the public deficit to 6.3 percent of gross domestic product this year from 8.9 percent last year, he stressed.

Spain’s outlook is clouded by high borrowing rates, recession, a jobless rate of nearly 25 percent and a financial crisis that led to a 100-billion-euro ($124-billion) eurozone rescue for banks.

Analysts increasingly believe it will now be forced to seek a wider sovereign bailout soon, with about 30 billion euros in debt repayments looming next month.

Spain expected to win the support of German Chancellor Angela Merkel for its efforts on a visit to Madrid on Thursday, De Guindos said.

“I don’t think she is coming to tell us what reforms to make, not at all,” the minister said.

“I think she is coming, essentially, to support the decisions that have already been taken and announced by the Spanish government,” he added.
“All the contacts I have had with the German finance minister have shown we are on the same track.”

Signs of Spain’s financial strains accumulated Monday, as the Andalusia region said it would seek central government aid with a one-billion-euro “advance” to provide liquidity.

Spain’s government has said it plans to set up within weeks an 18-billion-euro liquidity fund for troubled regions, which suffered an explosion of debt after the 2008 property crash.

As interest rates spiral, some of the 17 regions are struggling to meet debt repayments.

Andalusia is the fourth region to announce it will seek aid from Madrid: the southeastern region of Murcia wants 300 million euros; northeastern Catalonia 5.0 billion euros and eastern Valencia at least 4.5 billion euros.

On the financial sector, De Guindos said he expected the state-backed Fund for Orderly Bank Restructuring (FROB) to announce “within hours” an injection of capital for rescued lender Bankia.

Bankia was nationalised after saying it would need a total 23.5 billion euros to salvage its balance sheet, loaded with risky loans that had turned sour.