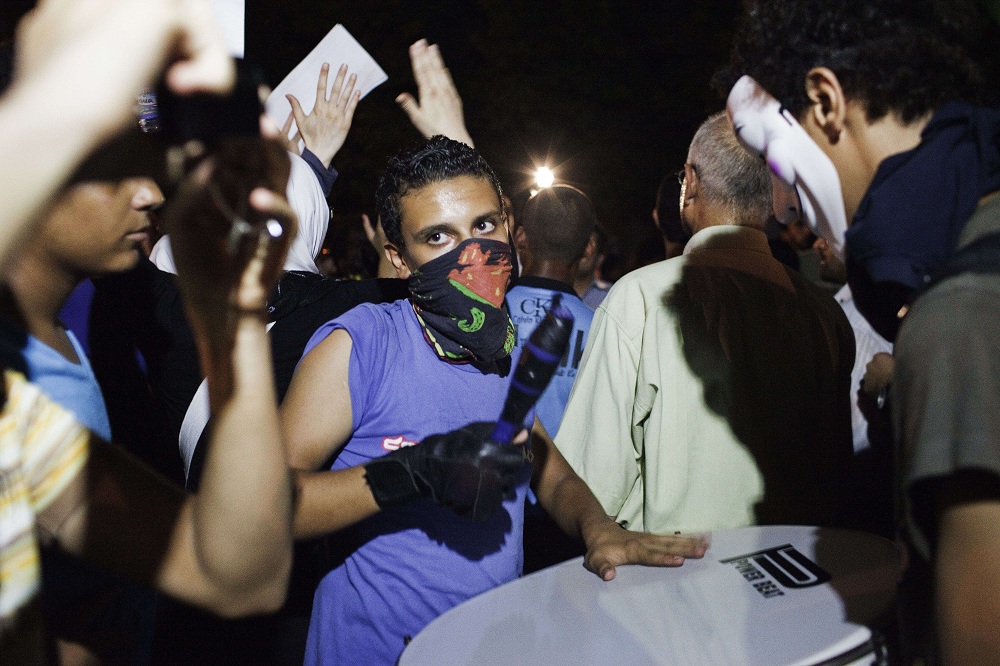 After clashes outside the Syrian embassy on Tuesday night the Muslim Brotherhood (MB) is calling for demonstrations outside mosques all over Egypt next Friday to show solidarity with the Syrian uprising.

A group of protesters tried to raise the Free Syrian Army flag at the Syrian embassy in Garden City on Tuesday night, which resulted in clashes with security forces.

Ahmed Aggour was present on Tuesday night and told the Daily News Egypt that that between 100 and 200 protesters turned out, including some Syrians who live in Egypt.

“Honestly, the violence started from our side this time. The people wanted to raise the Free Syrian Army flag and they knew that that would not happen peacefully,” he said. Aggour said some of the protesters tried to stop the ones that engaged in clashes but once the first rock was thrown, things got out of hand.

In response, the police fired tear gas at the protesters and threw rocks in return. “They also fired some shots, but they were in the air,” he said. “I got frustrated and left around 10 at night but the clashes continued until 2 or 3 in the morning.”

According to Reuters, five people were arrested in the clashes.

Aggour was present at a much larger protest that attempted to raise the Free Syrian Army flag at the embassy in mid-July. It had also turned violent, but Aggour said this was not instigated by the protesters.

To have an impact, Aggour believes future protests will have to be much larger. “The protest has to be organised and it has to be larger in number because no one will attack a large protest. I’m talking about sizable numbers, around 5,000 protesters and there has to be a sit-in.” he added.

The 17 month long Syrian uprising started in March 2011 and has left 26,000 dead, according to the Syrian Observatory for Human Rights. In August alone, 5,000 were reportedly killed, according to the Observatory. Hundreds of thousands are displaced both inside and outside Syria, with the UN reporting that 100,000 fled the country in August, the highest monthly total so far.

President Mohamed Morsy has spoken out against Syrian President Bashar Al-Assad’s regime. In his speech at the Non-Aligned Movement Summit in Tehran, he described the Syrian uprising as a “revolution against the oppressive regime in Syria.” He has also suggested a quartet initiative to resolve the Syrian crisis, which would include Turkey, Iran, Saudi Arabia and Egypt.