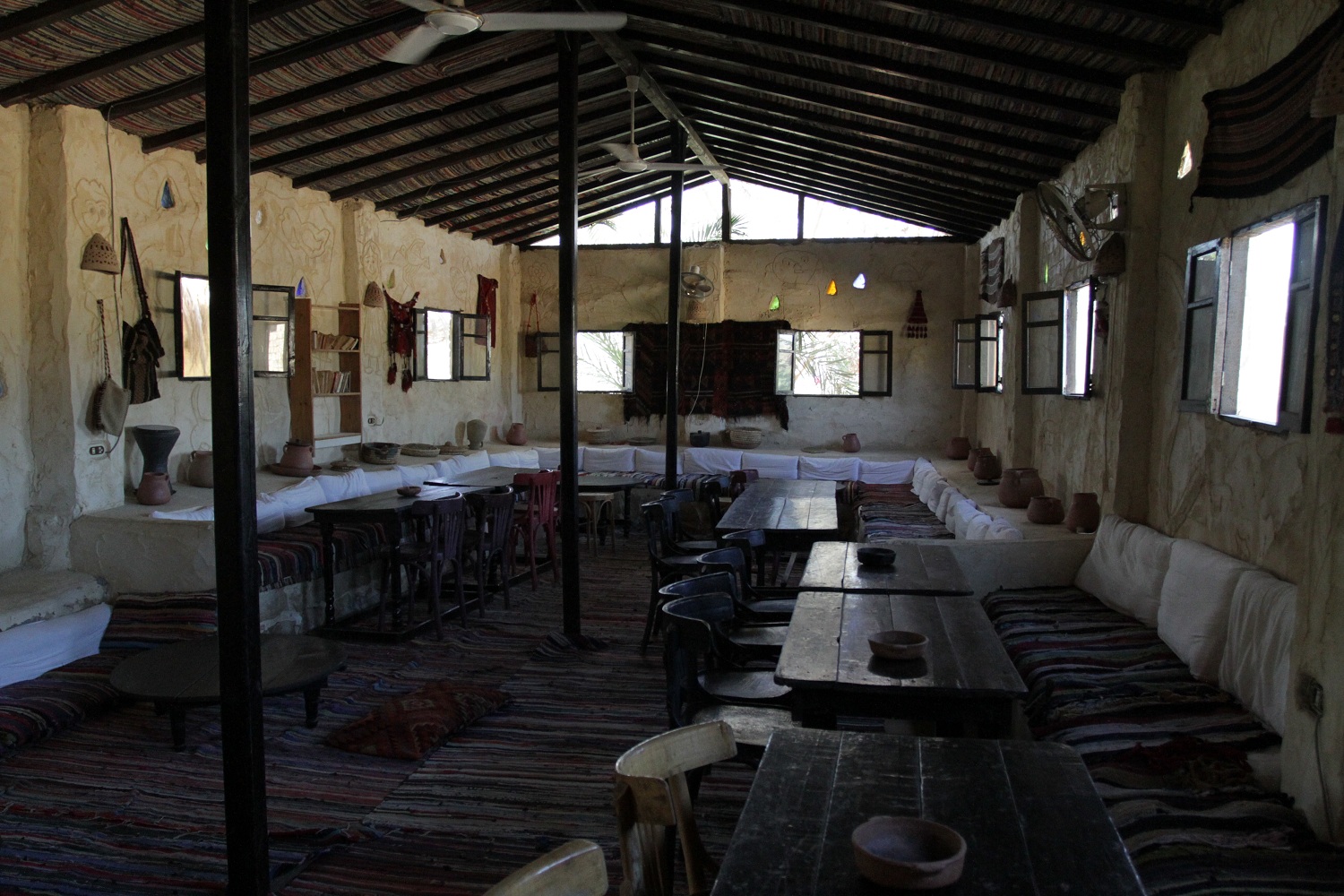 Abdo Gobeer’s ecolodge was built and intended as a quiet retreat for artists and intellectuals from Cairo. He moved from Cairo in 2001, and whilst he was writing his first novel, friends would visit at the weekend. Soon there were “people sleeping everywhere,” and someone suggested he build rooms for artists and writers to come and stay in. Soon this small part of Fayoum was a proper little artist’s colony, it is still known as such.

Abdo was adamant that the buildings should be built in an environmentally friendly, sustainable and Egyptian way, “I visited Sinai, Siwa and Dahab to see how places were built,” he said. “I studied different designs, and found that if you only build with wood it’s too noisy and you can’t sleep so I built with mud bricks, and hired people from the local area and we deliberately designed the place in a naïve style.”

The lodge proved popular, and soon developed into more of a social enterprise than a rustic B&B. Abdo organized the community around him, providing training for locals in rubbish collection and sorting, and running glass and paper recycling workshops. He rents an old house in the village where NGOs run clinics for women and children, handicraft workshops for girls, and a playground and garden for small children. Abdo buys all his produce from local farmers to avoid purchasing from bigger farms which use chemicals.

However, between January 2011 and January 2012 Zad Al-Mosafer received next to no visitors at all. 80% of Abdo’s guests up until then were Cairo-based foreigners and although business has picked up a little bit since January, Abdo was recently forced to sell two pieces of land in order to finance the guest house. He sold it for what he believes is half the market value and believes the land will be used to build more ecohouses, “We don’t know what’s going to happen in the future. We are facing a very big financial problem. Lots of people work here and I am worried that they won’t find food.”

Having made the commitment from the beginning of the Zad endeavor to provide work for the local community, he fears for the future of those who depend on him for work; people like Azuz, who works at Zad in room service, supplements his EGP600 monthly wage from the lodge with driving guests to sights around the area, but now is struggling to feed his wife and two children on only the wage from the guest house.

In terms of advertising, Abdo says after establishing himself in the market with universities, cultural centres and embassies, he didn’t need to advertise anymore, but now that the market is proving difficult, he finds it hard to attract Egyptians. There are twenty ecolodges in Egypt and they are a friendly network, but since the revolution organisation within it has slowed down. “I hope people are going to understand that tourism is important for Egypt from an economic point of view,” he said.

“The new constitution should not include anything that stops foreigners from coming to Egypt, from drinking alcohol or from feeling free on the beaches. Any law that will affect freedom will affect everybody involved in the tourism industry. We need to bring back security to the streets of Cairo so that people return here.”

The atmosphere at Zad Al Mosafer is one of peaceful serenity. Despite the heat, the cool lawn and the shaded areas feel fresh and relaxed. When I asked Abdo to describe what an ecolodge should be, he said “it is a place where you can take off your shoes, go to the fields, relax and eat good food.” Surely that should be the perfect place to go to reflect on 18 months of social unrest, political upheaval and monumental change?