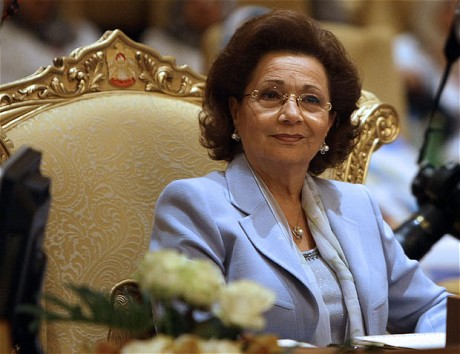 Egypt’s Illicit Gains Authority had a busy day on Tuesday as investigations against former first lady, Suzanne Mubarak, and former Minister of Culture, Farouk Hosny, started with the latter being referred to a criminal court. As the pair had previously been seen as ‘protected’ from prosecution, these new developments indicate further crackdowns on ex-regime figures.

Suzanne Mubarak is accused of illegally appropriating over 64 acres of state-owned land in Al-Sharqia, along with her husband and their two sons, Alaa and Gamal.

The investigation is being presided over by Chairman of the Appeals Court Judge, Ahmed Idris, who is commissioned to look into corruption charges related to the Ministry of Agriculture.

Mubarak is currently serving a life sentence for the killing of peaceful protestors in the 25 January 2011 uprising that ousted him. His sons face numerous corruption charges and are being held on remand. Suzanne was until recently the only free member of the former presidential family.

She was charged with corruption and abuse of state property last year but reached an out of court settlement with the state, paying over $4 million and returning a state-owned villa.

Egyptians wondered why only Suzanne was spared after the rest of the family was imprisoned, with speculation pointing to either Mubarak making a deal to spare her or the former first lady having leverage over the country’s interim military leaders.

Former culture minister, Farouk Hosny, who held the position for over 23 years was one of the very few Mubarak-era ministers not to be prosecuted as well. Hosny was close to Suzanne and it is rumoured that it was she who got him appointed as minister.

The fact that both were not prosecuted for such a long time could indicate that Mrs Mubarak protected her long-time ally and now that she herself is facing charges, her protection has lost effect.

Hosny was referred to the criminal court on charges of abusing his authority for illicit gains and being unable to explain an increase of EGP18 million in his personal account after he assumed office, according to Judge Assem El-Gohary, Assistant Minister of Justice for the Illicit Gains Authority.

El-Gohary said he had interrogated Hosny and the former culture minister was unable to explain the sources of his wealth and how he had acquired many pieces of land, buildings, stocks and bonds.

Hosny told Egyptian daily Al-Youm Al-Sabaa that he had not been subjected to an interrogation at all and that all his money comes from the sales of his paintings and his 30 percent of shares in two Nile boats.

Another former regime figure, Mounira El-Qadi, was relieved of her duties as the head of the tax zones sector. Many previously accused her of only having obtained the position through her husband, Chief of Staff of the Armed Forces, Lieutenant General Sami Anan.

The minister stated that El-Qadi had requested an open-ended vacation for personal reasons.

El-Qadi is, at 63 years old, past retirement age yet her tenure was renewed. Many tax zone employees have held protests in recent times calling for her to be ousted.