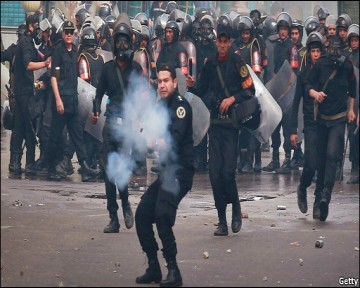 Even though ousted President Hosni Mubarak received a life sentence for failing to stop the killings, courts have not found any of those charged with killings to be guilty except for two, and both received either suspended sentence or were tried in absentia. Two hundred security officials and former regime members have been tried or still face the same charges but because of inadequate investigations and lack of evidence, convictions have not been possible.

Riot police waged a fierce crackdown on protesters during the January 2011 popular uprising in Egypt which toppled Mubarak, leaving a thousand deaths and many thousands missing. The lack of evidence on the killings prompted many Egyptians to accuse the Interior Ministry of hiding or tampering with evidence that might have helped convicting the killers.

Several fact-finding committees were formed to find the truth on who gave the orders and who carried out the killings, yet none of them gave any result. The latest of which is a committee appointed by President Mohamed Morsy in July 2012, and tasked with reviewing the investigations and trials of the 200 accused officials. Like previous committees, no results were announced until now.