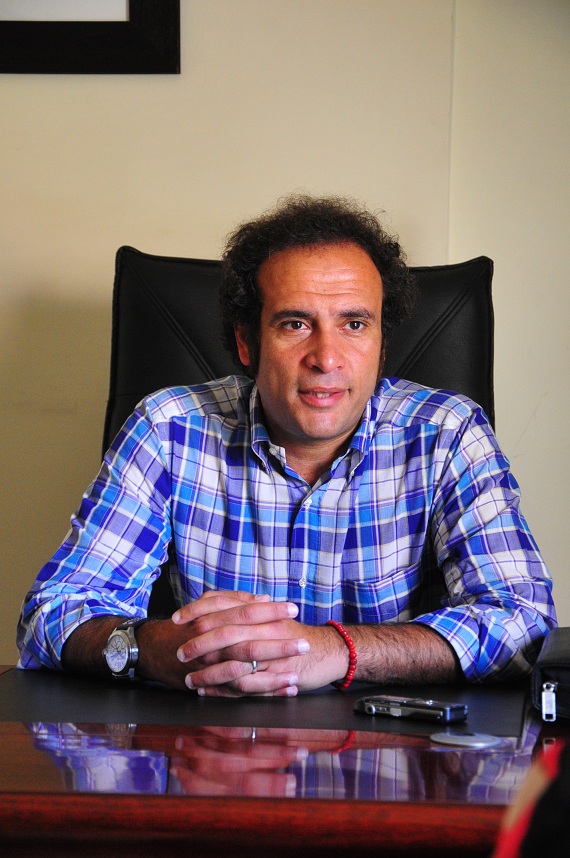 Being one of Egypt’s most active political analysts, how would you evaluate the current political scene?

Egypt is in transition and continues to face all the difficulties, crises and symptoms of a country in transition. We continue to face very hard socio-economic times that press the need for action on politicians and social movements including the governing Muslim Brotherhood. All are trying to address the socio-economic situation. Opposition parties and movements are making politics out of severe social and economic conditions, and protests activities have been going on uninterrupted throughout the last two years.

Secondly, as in all countries transitioning to democracy or a different kind of governance, Egypt faces the challenge of building new institutions to manage its new polity. We have an elected president, but we do not have a parliament. We have been unable to develop real policies and strategies to form our institutions. We haven’t been able to pursue real policies on the ground to democratise and reform our state institutions. We continue to have problems in different institutions, primarily in security, media and the judiciary. All three main institutions need reform.

Thirdly, the political scene seems to be highly polarised and that is quite typical of transitioning countries.  We continue to have polarisations along different lines; one is Islamists versus non-Islamists. It is quite evident that we are witnessing the emergence of two camps, the Islamist camp which is governing as of now and the liberal leftist camp which is in opposition, but yet to define its place in a meaningful manner. The major problem we are facing as liberal parties is to how play politics by taking the business of constructive opposition seriously by not simply opposing.

Finally, we are not addressing people’s fears. Take for example the fear of the Coptic community. We have over 100,000 Copts who fled the country between 11 February 2011 and last month, according to statistics. The outcome of that is a new fascism of sorts, which manifested itself on 24 August. It is a nationalist fascism, as those are people who are primarily playing with people’s fears to take to the streets and gain political weight and relevance without having any suggested solutions to our crisis. This is not politics; it is scaremongering.

How would you comment on the selection of Mohamed Morsy’s presidential team?

I am not going to comment on personalities. Structurally though, I have always said expecting an Islamist president to… reach out to broader constituencies and political parties in his administration is romanticising politics. Speaking about being a president for all Egyptians was a romantic political statement. It was useful at a certain point in time, before the presidential elections results were announced… to position Morsy in a way acceptable to a wide spectrum of Egyptians with regards to the revolution and its objectives and fearing a single-handed Islamist domination.

He needs his administration. He needs to have his people around to pursue his project, which he promised Egyptians to pursue. That is natural for an elected president. Those who are pushing for a national consensus team and presidential team are romanticising. I am not concerned about the selection. I expected it.

However, two questions arise: is it a coherent team to pursue his project? I am not sure. His cabinet has a strange mix of old people, with some Muslim Brotherhood members and a few technocrats.

The second question is: are Morsy and the Muslim Brotherhood speculating to build a strategic majority for Islamists in Egyptian politics?

These two questions force other groups, primarily liberals, to focus on performing some opposition work on cabinet performance; scrutinisation, commenting, and criticising. Secondly, it pushes us [liberals] to build a bloc as well… to oppose what the Muslim Brotherhood and the FJP seems to be doing

President Morsy has just ended his first trip to Iran and China. How do you assess this choice of countries?

I do not disagree with the selection of countries. If I were he, I would probably have done so. He needs to break away from Egypt leaning towards the west in a rational manner and not by calling for a turn away from the US and European Union, or a complete redesign of Egypt’s foreign alliances. Going East is right. Focusing on economic and trade issues and going to a country which is doing very well economically, while western countries are in the middle of economic crises, is a wise decision. Opening up and going to China is right.

I would have loved to see him going to different Asian countries, where we can learn much in terms of developmental projects and sustainable development. We need to improve trade relations and economic relations with Asian countries. It is important though to rationalise without cutting ties with the US and the EU.

I disagree, however, on taking the trip to China from a pure economic perspective and leaving politics aside. Leaving politics aside is quite dangerous, where China along with Russia and Iran are playing a role in sustaining Al-Assad’s regime in Syria. Morsy has to get in the habit of discussing the issues of democracy and human rights in every place he goes. He is an elected president, who ruled after the 25 January revolution and he is entitled to raise issues as human rights violations in China.

As for Iran, I do not understand the different alarms that people are raising in the Egyptian public space. He was attending a conference of the Non-Aligned Movement, which Egypt established historically, so he had to be there. Secondly, if we are afraid of the impacts of the Iran visit on our Gulf relations, then we need to know that most Gulf States have diplomatic ties with Iran and there is no good reason for Egypt not to have diplomatic ties with Iran.

I agree with his trips but simply hope that they do not get reduced to funds-generating visits.

In preparations for the upcoming parliamentary elections, do you have intentions to join any of the newly established parties?

What I am currently doing is working with different parties across the spectrum. I aim to come up with a bloc of liberal and leftist parties and build up liberal democracy to contest the elections with the final list of candidates based on the electoral system we will have. My interest is to push new liberal parties including Al-Dostor and Strong Egypt to contest the elections with a unified list of candidates.

We are working with all parties. I myself will continue in my Misr Al Horreya party. I can run as an independent or as a party member. I see the relevance as of creating bigger entities, but I believe that the first step is to do a real effort on the ground to reach an electoral bloc. Based on that you get into parliament and then you can start merging parties. Let’s focus on organising our positions vis-à-vis the constitution and coming elections, let’s get our unified lists and then later on we can decide on merging. The future is definitely for bigger entities in Egyptian politics like Freedom and Justice. I see hope in establishing a liberal bloc.

We will soon have some announcements that will please Egyptians with regards to election-based blocs.

How well do you think that liberal political parties have learnt from their mistakes in previous elections?

There is no such thing as learning from mistakes in politics. In politics you have to make mistakes all the time. The question is about rationalising what we do, and rationalising means. We have to read the scene. We have called Egyptians to go to the ballot box five times and regardless of the details on all five occasions Islamists emerged victorious.

We have to learn why we haven’t been able to compete in a stronger manner. We need more organisation, to avoid binary competition and that unity takes time.

In politics we cannot enforce unity. What I am hoping for is just try to get a unified list of candidates and a unified position on the constitution once the draft is out. Based on that unity will come in a homegrown manner.

Do you expect that the coming parliament will also be dominated by Islamists?

Speaking as a politician not an analyst, I do not hope to see a parliament ruled by Islamists again. Not out of fear or hatred, but because it is good for Egypt to have two centres in its politics. Having one centre consolidating its politics means that we will run huge risks securing the state and the independence of institutions. We need to have a second centre.