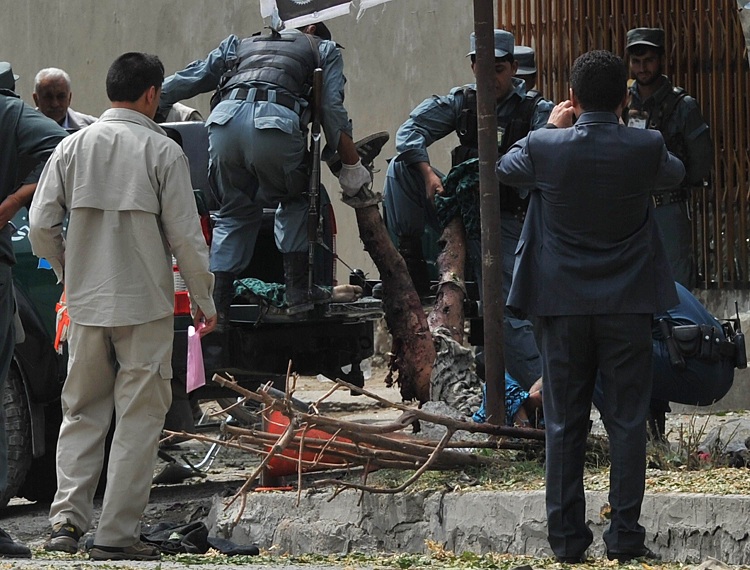 A suicide bomb attack took place in the heart of Kabul on Saturday killing six civilians just outside of Camp Eggers, a coalition military base home to 2,500 coalition forces responsible for training Afghan personnel, according to a NATO spokeswoman. The attack came just a day after the US classified the Haqqani militant group a terrorist organization.

The attack was carried out by a man riding a motorcycle packed with explosives. A Taliban spokesman, Zabihullah Mujahid, told Reuters that the motorcyclist was a Taliban operative targeting an “important intelligence office used for recruiting Americans and Afghans for spying.”The bombing took place as celebrations were held marking the death of Ahmad Shah Massoud, killed on 9 September 2001 by Al-Qaeda militants disguised as reporters. Massoud is widely hailed as a hero in the US-backed war against Soviet occupation in the 1980’s and a staunch opponent of the Taliban rule thereafter.

According to the spokesman for the Afghani Ministry of Interior, Sediq Sediqqi, children were among the casualties of the attack which he believes was carried out by the Haqqani insurgency group. The day before the attack, the US government had classified the Haqqani group, one of the most organised and prolific insurgency groups in Afghanistan, as a terrorist organisation. NATO could not confirm whether or not the Haqqani network was behind the attack, and were unwilling to speculate on the matter.

The Haqqani have been held responsible for a string of deadly attacks on Afghani and NATO forces over the few years; attacking a US embassy last year, suspected of plotting the assassination of President Hamid Karzai, and attacking a US outpost using a truck filled with explosives in June. The group is based in the mountainous region between Afghanistan and Pakistan.

The designation of the Haqqani network as a terrorist group is feared to elevate tensions between the US and Pakistan, due to the group’s connection with the Pakistani military and fears the move may stall the already fruitless peace talks between Taliban and the US. The Haqqani and the Taliban are suspected of being behind the kidnapping of an American soldier held in captivity since 2010 and efforts to broker his release have failed, with both the US and the insurgents unwilling to compromise on their demands.

According to the New York Times, US Intelligence reports indicate the group is an extension of the Pakistani Military’s Inter-Services Intelligence (ISI) directorate and enjoys some form of support from the ISI, a claim which has been a sticking point in the already strained US-Pakistan relations.

On the other hand, now that the Haqqani are officially a ‘terror cell’ the US could put pressure on Gulf and Arab banks to freeze the assets of suspected Haqqani operatives and to “degrade their ability to conduct these kinds of violent acts,” a White House spokesman said on Friday.The Pakistani government has so far remained silent on the matter, an indication of their reluctance to declare support for either side so early.