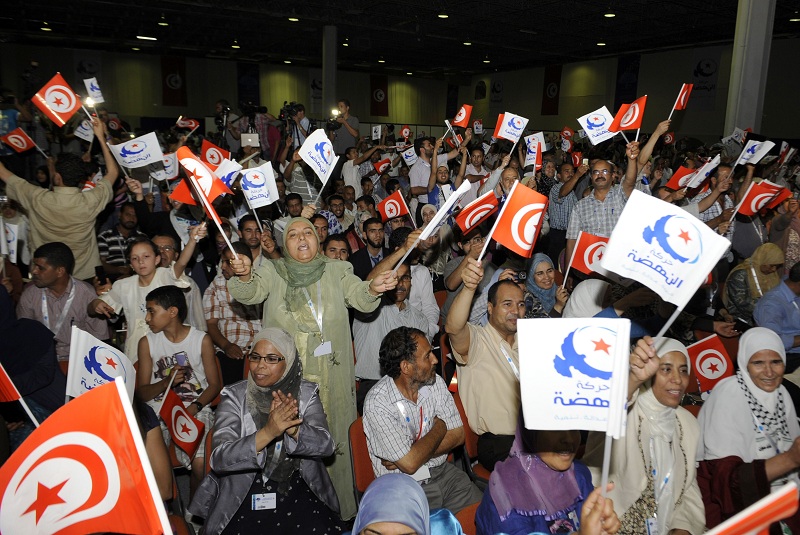 Thousands of Tunisians from an offshoot of the moderate Islamic Ennahda Movement gathered on the streets of Tunisia on Friday, demanding an end to corruption, according to the London Asharq Al-Awsat newspaper.

The protest which was called for by a group called the “Ekbes” (Arabic for push) and demanded cleansing of the country’s institutions especially the media and political institutions, which they say are still under the control of the former regime. The group is founded the youth wing of Ennahda, said Asharq Al-Awsat.

Ennahda is the party with the majority of seats in the Tunisian National Constituent Assembly. A coalition has been formed between three political parties, Ennahda, the Leftist Democratic Forum for Labour and Liberties, and the Congress for the Republic.

Not all of Ennahda’s coalition partners agreed with the protests, claiming it was Ennahda, not the old regime, which was trying to dominate political life. The Congress for the Republic, which the current President of Tunisia, Moncef Marzouki  founded in 2001 and led for 10 years, decided not to join the so-called “Friday of the Accountancy and Cleansing”, said Asharq Al-Awsat.

In a speech given by Marzouki last month, he criticized Ennahda adding that there is an increasing feeling that “Ennahda is trying to take control over the country’s political and administrative institutions by appointing their allies who may or may not be qualified in them, which reminds us of the previous era.”

Yet, according to Asharq Al-Awsat, Ennahda claims to have appointed their allies only in order to remove allies of Zine El Abidine Ben Ali’s regime. Last month, Tunisians took to the streets in Sidi Bouzid in protest of the feeling that the revolution has failed to change much in their lives.

This comes at a time when the Tunisian National Constituent Assembly is struggling to put together a constitution for the country. According to AP, there is already an ongoing dispute on how to word the constitution. The status of women and the role of religion are among two of the very thorny issues that have sparked controversy in the Tunisian society.

In December 2010 and January 2011, Tunisians took to the streets, in the first of a string of uprisings in the Arab World, ousting their president of 23 years, Zine El Abidine Ben Ali. Yet, even though Tunisia had a head start, it appears to have a long way to go before it reaches a stable political climate.