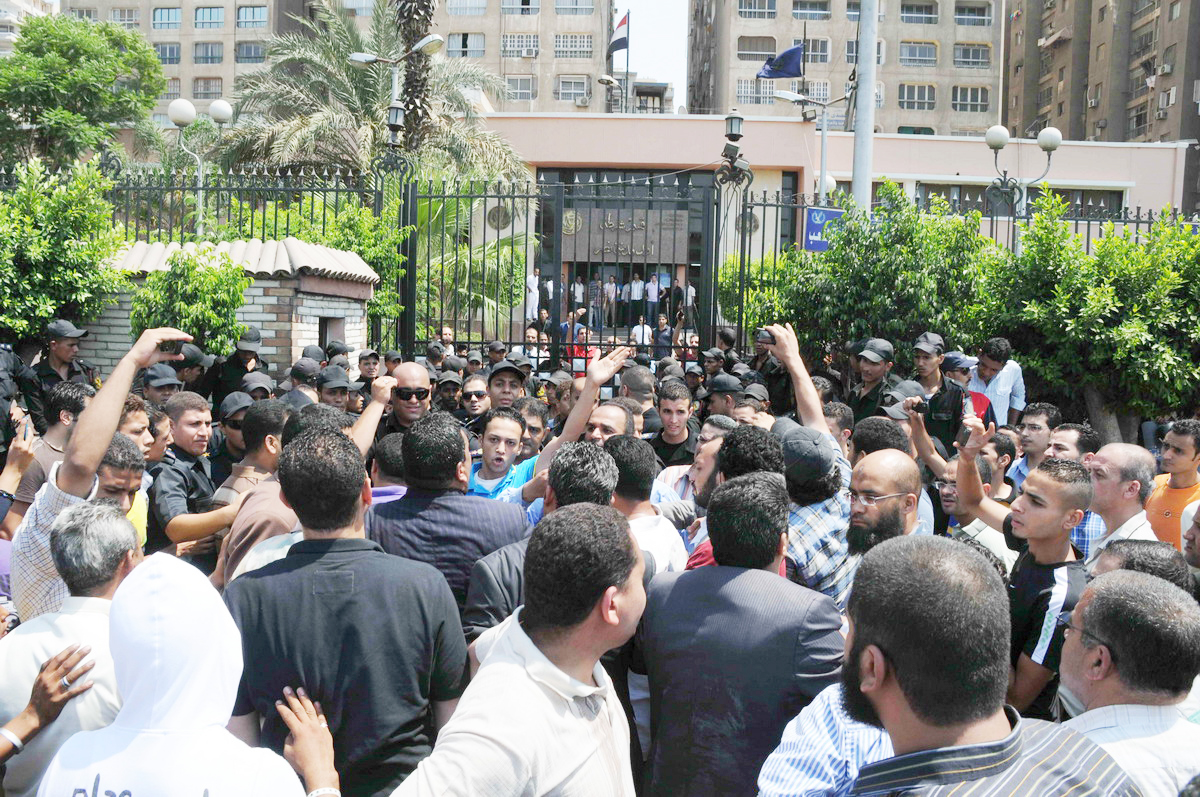 Dozens of lawyers and law school graduates protested against the rise in registration fees for lawyers at the General Syndicate for Lawyers for a second day on Sunday.

The board of the syndicate elected to raise membership fees from 1,500 EGP to 3,500 EGP.

The protesters vowed to continue demonstrating in front of the syndicate, which is chaired by Sameh Ashour, until the decision is reversed.

“Our numbers have increased since yesterday,” said Islam, a recent graduate from Ain Shams Law School, “and we’re not leaving until the fee is lowered again.”

The protest came to a halt when syndicate board member Khaled Abu Kresha arrived to talk to the protesters. He echoed statements made on Saturday night on CBC by Sameh Ashour, who insisted the rise in fees was to support health care and pensions for the 500,000 lawyers he claims are currently members of the syndicate.

In his interview Ashour also highlighted that in 2011 the syndicate discovered that assets had gone down from EGP 136 million to EGP 96 million, signifying a large difference between costs and expenses. The rise in fees, he argued, were to combat the increasingly amount the syndicate spends on its hundreds of thousands of members and the thousands of new lawyers seeking to enter the syndicate yearly. He stressed that the fees paid to the syndicate are allocated for the benefit of those who pay them.

As exchanges between the protesters and Abu Kresha became heated, many ran back to the front stairs of the syndicate to continue chanting.

“Our diplomas say ‘lawyers,’ why do you treat us like criminals,” chanted the protesters. “[President] Morsy, Morsy where are you? Come see the injustice with your own eyes.”

As Abu Kresha walked into the syndicate, a woman yelled, “we need either money, wasta (preferential treatment), or authority to succeed.”

Other chants included, “Ashour, tell the truth: is the decision unjust or not?” and “Chairman of the board, where will we get the money for the [membership] card?”

“I can work a menial job and after a year or two years have enough to earn the registration fee,” said Abdel Aziz, another recent law school graduate. “But by then, maybe they’ll raise it to 5,000 pounds.” He also highlighted that what made the decision so devastating was that it was drastically raised very suddenly, catching many of those looking to join the syndicate off guard.

Abdel Aziz was one of many recent graduates at the protest who will have to find different ways to compensate for the sudden 2,000 EGP increase before beginning their law careers.

“We are willing to pay the original price of 1,500 EGP, even though this is also expensive,” he added.