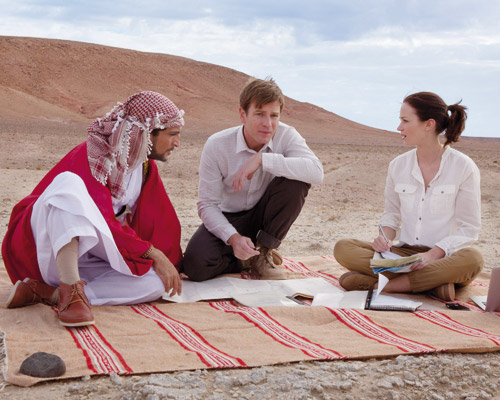 The organisers chose the ancient city because of its age and status in the world, citing its ‘charm’ and its reputation as a heritage capital. According to Salma El Shamaa, a prominent figure in Egyptian media and a member on the festival’s board of directors, the festival aims to bring attention back to the south of Egypt and encourage tourism.

“Southern Egypt has a right to participate in the culture scene and have its own unique events and not have to rely on imports,” explained El Shamaa. “The area remains largely untouched when it comes to cultural activities.”

Last year, only Alexandria hosted an international film festival, with the likes of Cairo and Ismailia being cancelled due to financial difficulties at the Ministry of Culture.

The festival is organised by Noon, a cultural nonprofit foundation, under the auspices of the Ministry of Culture where El Shamaa is also vice president. The organisation was born, along with the idea for the festival, well before the revolution but logistical issues and gaining approval from the State delayed the festival.

“The festival is trying to bridge the gap because so many people see American films but the European film tradition is the oldest, starting with France,” El Shamaa told the Daily news Egypt. “Egyptian cinema and European cinema are indelibly linked. We want to recognise the role of European cinema on world cinema and especially the Egyptian tradition.”

The festival will focus on British cinema and El Shamaa says it will continue to focus on European films in the future, with no definite plans for expansion beyond European cinema. “The festival is made for this specific purpose, though we do hope to find other festivals catering to other cinematic traditions”, she said.

As part of the focus on British cinema, the festival will honour British producer Paul Webster and his film Salmon fishing in the Yemen (which notably includes Egyptian actor Amr Waked) will be opening the festival.

Workshops and media attention from Europe are expected. “We have more than 120 media representatives coming as well as European guests of honours,” El Shamaa said.  “The goal is not to watch a film and go home. The goal is to have a staple of the cultural scene in the South of Egypt and to encourage people to dream and learn so they can accomplish their own cinematic projects.”

The festival comes at a time where the future of cultural events in Egypt is largely unknown and where fears, both founded and unfounded, circulate around the marginalisation of arts and culture in Egypt.

Luxor famously held the Luxor African Film Festival last February which was also largely organised by civil society. Also noteworthy is that both the Cairo International Film Festival and the Alexandria Film Festival for Mediterranean Countries are just around the corner, signifying a myriad of cultural events to choose from.