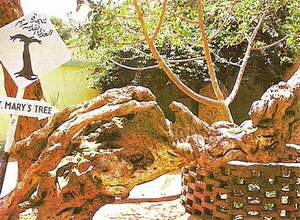 Several residents of the impoverished Mariam’s Tree neighbourhood in the Matareya district of Cairo were forcibly evicted from their homes last Monday, after Egyptian Central Security Forces raided their homes.

The Egyptian Social Democratic Party (ESDP) sent a statement to the Daily News Egypt, outlining how security forces raided homes and threatened to expel residents unless families paid lump sums of up to EGP 12,000. According to Hussein Gohar, the International secretary for the ESDP, the forces were under orders from the Ministry of Religious Endowments to collect rent from the residents. The ESDP reported many families being threatened at gunpoint to pay up EGP 1,000 in order to avoid eviction.

“The intimidation of the poor and the violations of the right for housing using force to collect alleged arrears, arbitrarily calculated, lies within the scope of the thuggery the state continues to undertake under the control of Muslim Brotherhood in its practice against the poor and needy Egyptians,” the statement read.

Gohar expressed disbelief at the attack, saying the ESDP could not understand why this happened. “These people have been there for are long time and they are below the poverty line,” he explained. “Some of them were not paying rent but they were never asked to do that.” Gohar explained the government was present to collect rent money for water companies, who had asked residents to pay their debts.

Some of the families succumbed to the demands at gunpoint and paid the EGP 1,000 while others were forcibly evicted. Many of the victims were working single mothers responsible for the family and responsible for their livelihoods, according to the statement. This is “one more attack against the poor in the country,” Gohar concluded.

The ESDP has assembled a committee of lawyers to fight for the residents of Mariam’s Tree and return the displaced to their homes.

The forced evictions are a symptom of a much larger problem in Egypt, namely the Cairo 2050 development scheme. The scheme aims to relocate two thirds of Egyptians living in Cairo to satellite cities and was put in effect during Mubarak’s reign as part of a plan to modernise Cairo.

According to the Secretary for Human Rights at the ESDP, Sally Sami, what is happening is part of a coordinated plan to redesign Cairo. “I believe incidents like this one and Ramle Boulaq are very well connected.”

“The poor have a right to this city as the rich and their basic rights have to be respected in this regard.”

Often people are moved to satellite cities where services are not fully connected food prices tend to be higher and the security presence is minimal. “There are so many things that are not taken into account,” Sami said. “And the end result is that people are just getting poorer.”