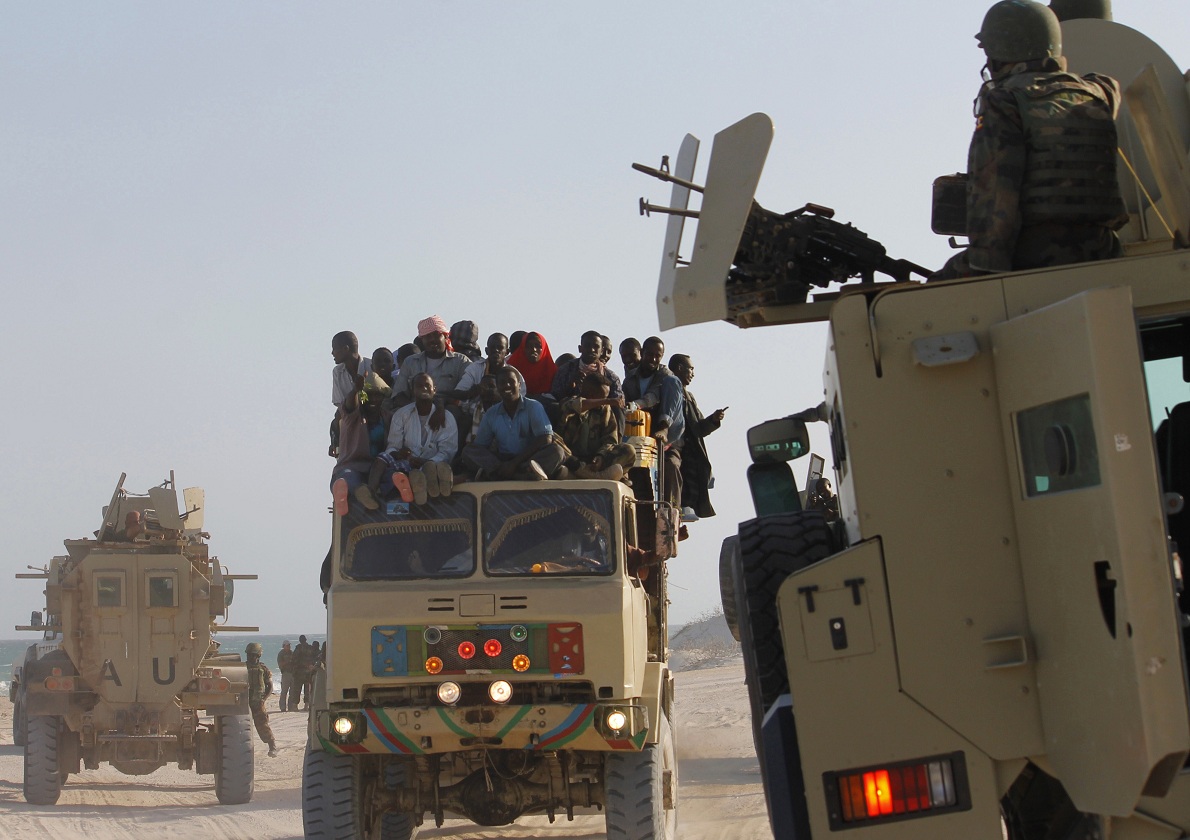 “My brothers and sisters, it is all up to you. You are the highest sovereign authority in the land. You are the custodians of the future which is now in your hands.” These words were part of a letter penned by the United Nation’s Special Representative for Somalia, Augustine P Mahiga, and addressed to the newly minted Somali Parliamentarians who will choose the next president of Somalia in a secret ballot election on Monday.

The vote has been a long time coming and is a welcome development for the UN which has been working in Somalia to form a government with some semblance of legitimacy. Their plan has consisted of creating a “group of elders” which is divided among the four main clans of Somalia, with assured representation for minority groups. These elders then nominated candidates for a new parliament and a vetting committee screened the selections for possible criminal involvement. In the end, a 275 member parliament was created and one of its first duties is to elect a president for Somalia.

Mahiga’s letter goes on to state, “after two decades of civil war, a collapsed state and innumerable indignities to the proud Somali people, we are hours away from the election of a new president, the event that will completely end the transitional period and move us towards a phase of political and socio-economic transformation.”

Yet there are some who doubt the totality of that promised transformation. In no small part because the front runner in the presidential race is none other than the man who has led Somalia through a miserable stretch over the past three and a half years, president Sharif Sheikh Ahmed.

Abdi Aynte, a Somali-American who recently spent time in Mogadishu said Sharif has become a favorite because of his ability “to manipulate the system by placing his supporters in the parliament. As a result, about 60 percent of MPs are members of the old parliament. In other words: status quo.”

This is the result of the laborious efforts the UN has gone through: a process of a questionable democratic nature, which may lead to a basically unchanged leadership. This is at a time when the country desperately needs change.

A report by the UN Monitoring Group on Somalia and Eritrea was leaked publically earlier this summer and it outlines systematic graft by the Transitional Federal Government (TFG) under Sharif’s watch.

Millions of dollars in aid were frequently kept in, and transferred between, public state bank accounts and the private accounts of Somali leadership. Sometimes this was an understandable step taken by a country with no banking system, but frequently large sums simply went missing.

Sharif is also personally accused of trying to obstruct the monitoring group, due to the group’s report citing Sharif’s rewarding of state projects to his friends, his securing of a passport for an Al-Qaeda operative under a UN travel ban, his attempt to board international airlines with armed bodyguards and divert flights, and his granting of diplomat status to a pirate kingpin.

Perhaps most sinister, is the fact that Somalia’s collapse has been exploited by the TFG. In the words of the UN report, “their leaders have successfully marketed the government’s weakness, fragility and possible collapse as a lure to attract more assistance. As a result, corruption, embezzlement and fraud are no longer symptoms of mismanagement, but have in fact become a system of management.”

There has also been criticism aimed at the TFG’s conduct in its ongoing civil war against Islamist Al-Shebab militants who control swathes of Somali territory and only last year were forced out of the capital of Mogadishu. International human rights groups accuse TFG forces of allowing children to serve in the infantry, carrying out unfair military trials behind closed doors, and indiscriminately firing into densely populated areas.

“The discipline within the TFG ranks hasn’t been particularly tight,” said Dr Laura Hammond who works at the University of London’s School of Oriental and African Studies. “The problem is the current government hasn’t had a lot of popular legitimacy hasn’t had a lot of control, and hasn’t been paying salaries of TFG security forces. There are widespread reports of corruption with up to 70 percent of the revenues going missing.”

Hammond said many Somalis would see the reelection of Sharif as a setback, “because it would suggest more business as usual. I think people are hoping that there is enough support within parliament for change.”

Whoever the new president is, their challenges will be formidable. Beyond good governance, something that seemed to have been beyond the abilities of Sharif’s first presidency, Somalia faces the challenges of an ongoing war with the Al-Shebab rebels, rampant piracy, and maintaining the unity of a diverse and fractured state.

Al-Shebab’s affiliation with Al-Qaeda has assured international attention for battle for power in Somalia. The African Union has a force fighting alongside the TFG and allied militias, and the US has filled Somali skies with unmanned drone aircraft. However, unless there is an alternative form of authority, support for Al-Shebab will be nearly impossible to stifle completely. Don Sharpes, a professor at Arizona State University, said, “on the political front, no presidential candidate has a real chance of rehabilitating Shebab, reconciling or negotiating a settlement, and certainly not Sharif.”

The UN plan has extensive provisions for how the government should combat piracy, and the TFG has agreed to those provisions. However, the real challenge comes in the implementation. Jay Bahadur, a writer who spent time living with Somali pirates, said he doubts Sharif or any new president will have much success against piracy. “The government simply lacks control over any of the territory out of which the pirates operate, a state of affairs that will persist into the foreseeable future,” Bahadur said. “Even the recent promises by the TFG to begin prosecuting pirates ring absurd, as no anti-piracy laws are in place and there are virtually no suspected pirates in government custody.”

Somalia is a checkerboard of contradicting and overlapping authorities. Besides the battles for control between the TFG and Al-Shebab, there are many regional authorities pushing for increased autonomy. Leaders from areas such as Puntland and Galguduud are working within the new government framework to ensure a level of autonomy within a federal Somali state, but the northern region of Somaliland wants no part in a new or future Somali state.

“Basically, they’re a de facto independent state,” said Hammond. For the past two decades Somaliland has been independent in all senses besides international recognition. The precedent in the international community is to stay out of succession debates until the two sides have negotiated with each other first, which was the case with South Sudan and the north, as well as Ethiopia and Eritrea. “Somaliland’s response to that is, well, we’re happy to talk to someone about recognition and about our independence, but who exactly should we be talking to. The TFG is not particularly legitimate in the eyes of most southern Somalis. What [Somaliland] says is that at the moment they’re just going through the motions and until there is actually a popular and legitimate government in place there is no one to negotiate their independence with.”

Of course, there is the potential for change, as there are 24 other candidates running against Sharif. In fact, some observers read the selection of Mohamed Sheikh Osman Jawaari for parliamentary speaker as evidence that Sharif’s reelection is far from guaranteed, because Jawaari beat out the candidate whom Sharif had backed for speaker.

In any event, Jawaari’s appointment was greeted as a positive step for the new government. “His selection was welcomed widely,” said Aynte, “in part because he’s seen as a credible, capable person. Comparatively speaking he’s replacing an illiterate businessman who was widely viewed as deeply corrupt. Accolades notwithstanding, Somali politicians have a knack for grandiosity once they’re in office. While I cautiously welcome his ascendance to this prominent position, I think he should be judged by his actions or inaction.”

As a war torn and famine stricken country, Somalia’s diaspora is sizeable and has been following the presidential election closely. Brandon Baumbach who has worked with Somalis in Minneapolis and Oslo, two cities with large Somali populations, said there is a joke in the diaspora “that people are running for president all over the place. Like you may run into someone in Minneapolis with a business card indicating they are a presidential candidate.”

Osman Ahmed, president of the West Bank Community Coalition in Minneapolis, said Somalis there have two favourites out of the pack. The first is Abdiweli Mohamed Ali, the sitting prime minister who is rumoured to have a shot at winning, and the second is Ahmed Ismail Samatar, a dark horse candidate who took a break from teaching in neighbouring St. Paul to return to Somalia for his presidential bid. Ahmed said, “people in Minneapolis are watching very closely, they keep calling back home and asking who the front runner is and who they think is going to be the next Somali president.” An understated Ahmed added, “there is a lack of confidence, between Sharif and the community.”

In the end, the two things a new Somali government needs to bring to the table are legitimacy and accountability. “I think it goes back to this issue of legitimacy, basically, the thing that’s going to make any progress toward finally dismantling Al-Shebab, and stopping the problem of piracy, and, in fact, even increasing peoples’ resilience toward famine has got to be a government that people feel represents their interests,” said Hammond. But the only way the people of Somalia can be expected to grant that legitimacy is if their government upholds its end of the bargain by providing services, security, and accountability. Hammond added, “when you have an accountable government, then things become possible. That’s kind of the key piece that is missing.” Sharif failed to provide that as head of the TFG, it remains to be seen if Somalia’s new parliament will trust him with another chance.