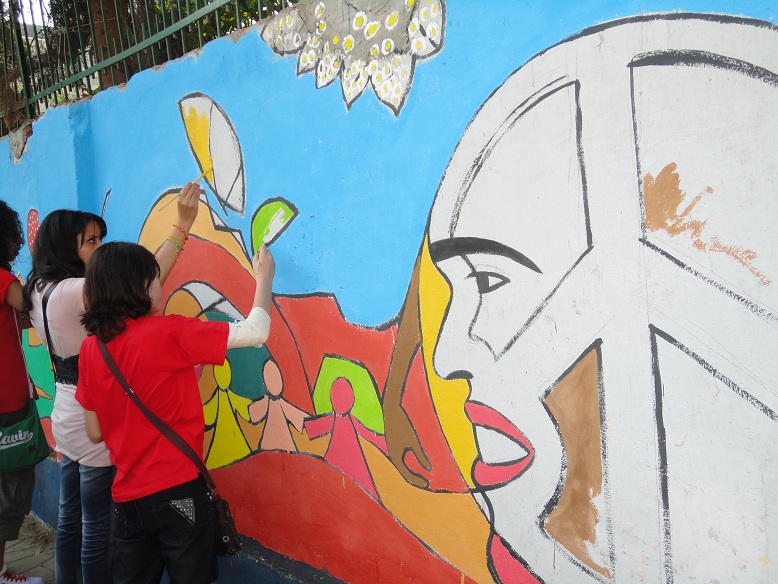 MasterPeace is hosting its second street arts festival in Dokki spreading a message of world peace through art and culture. The festival will take place on the last day of a ‘peace week’ which will lead up to the event. It will take place right next to Cairo’s famous shooting club, near the Ministry of Agriculture.

The event will include things like graffiti, dance, music, workshops on going green, and anti-harassment campaigns, among others, with the co-operation of many NGOs and organizations. One of the interesting activities which was well-received by the public last year was Origami, according to event coordinator, Ahmed Fathy, who said last year’s event exceeded their expectations:

“Last year we expected 500 to 600 people but we were overwhelmed by almost 2000. The Origami was also a big hit because it was provided by the Japan Foundation so the workshops were conducted by professionals.”

The activities will all focus in one way or another on ‘peace’ as a message, be it graffiti peace signs, or green campaigns. Even without a direct link, MasterPeace believes that grassroots cultural events are promoting peace simply by encouraging art and the empowerment of individuals through direct action.

MasterPeace is based in Holland but maintains a central office in Cairo, and is working towards the admirable goal of the largest peace concert in the world at the foot of the pyramids in September of 2014. Fathy explained why they chose Cairo as the peace capital of the world:

“Cairo, and Egypt in general, has inspired the world with the peaceful revolution its citizens conducted. The emphasis was always on peace and this is something that resonates very strongly with us. You could hear chants such as “peaceful, peaceful!” as an integral part of the revolution, especially when compared with other countries of the Arab Spring such as Libya or Syria.”

“The aim of the organization is also about stopping the spread of nuclear weapons. Out of 10 people we asked, a whopping 8 said they wanted nuclear weapons to be able to compete globally and ‘be like others.’ But the goal should be for those countries that have nuclear capabilities to be more like us and not us to be like them,” said Fathy, citing South Africa as a prominent example.

In addition to the focus on street art, ‘peace week’ will also host something called “Hibakusha” on the 21st of September. The word is Japanese for “bomb survivor” and the event will take place in Cairo University’s Faculty of Political Science featuring survivors from the infamous Hiroshima bombing, as well as from the more recent Fukushima incident.

Fathy also added that the city, and in particular the Dokki neigbourhood, have been very helpful and co-operative in aiding the success of the event and its continuation this year.

The festival takes place on 28 September and will be free to attend.