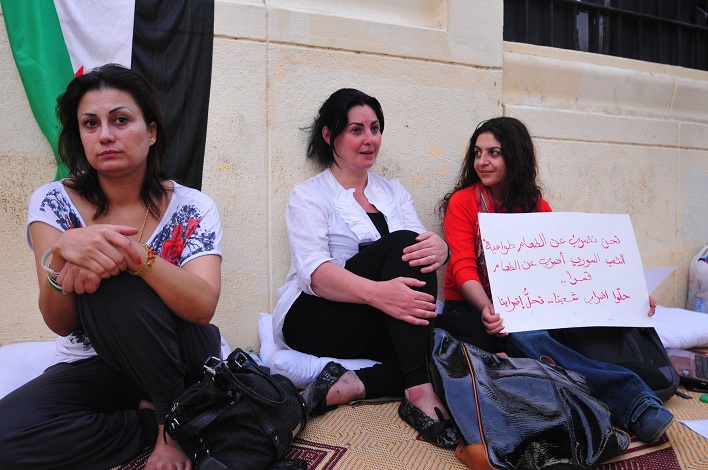 Not far from the square which nursed one of the most influential peoples’ uprisings in modern times, a group of six Syrian female figures spread out their mat and pillows and stationed themselves in front of the Arab League headquarter near Tahrir Square in Cairo, announcing a hunger strike on Tuesday, 4 September.

The six women signed a joint statement addressing the new United Nations and Arab League joint Syria envoy Lkhdar Ibrahimi, calling for a set of six demands and vowing to remain on hunger strike until their demands are met.

“This hunger strike shall not be lifted until our demands are met,” Lina Al-Tibi, prominent Syrian poet and writer and also head of the National Syrian Council’s media office in Cairo, said as she sat on her modest mat shaded by a tree a short distance from the Syrian media tent. “It is a decision we have all agreed upon; we’re not dissolving this hunger strike even if the price is being hospitalised; even if the price is our lives.”

Among the demands of the women are: imposing a no-fly zone over Syria; immediate rescue of Syrian women and children through humanitarian corridors; exercising pressure for the entrance of different media organisations as well as human rights organisations into Syria; working to block the passage of any ships carrying arms to the Syrian regime through the Suez canal; regularisation of the situations of Syrian refugees; and not granting the Syrian regime any further time limits.

“Hunger striking is the last of our weapons,” Al-Tibi said, referring to the protest mechanism which has been used extensively in recent times by Syrian activists throughout the world.

According to the official Facebook page of the Syrian National Council, Syrian activists and artists have undertaken hunger strikes throughout different cities since 26 August in Libya, Saudi Arabia, Lebanon, Jordan, Spain, Turkey, Germany and now Egypt.

“There is semi-coordination between the different hunger strikes worldwide,” Al-Tibi said. “But the special thing about this particular hunger strike is that it came from a group of women.”

The six women represent different sects within Syria to assure they are representative of Syrian society. They are joined by a few men who offer solidarity and assistance to protect the strikers.

“We have reported the beginning of our strike at the Qasr Al-Nil police department,” Al Tibi said. “Yet, while the generally accepted response worldwide is to send an ambulance with a physician to observe the state of those striking, nothing of the sort has been done in our case.”

Al-Tibi added that they had not received any or correspondence from any Egyptian parties or even the Arab League.

“The League is also refusing to provide us with electricity or even grant us access in order to use their rest rooms; a matter which forces us to abandon our mat at midnight and return at 4pm in the afternoon.”

At the time of the interview, only Al-Tibi was available at the strike, as the rest of the women had gone home to shower.