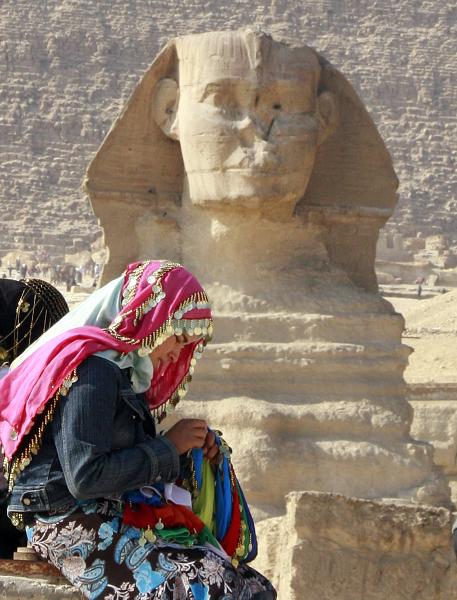 A group of almost a hundred tour guides held a protest at the Museum of Egyptian Antiquities yesterday, denouncing the ongoing lack of security in tourist sites.

Occupying a sunny sidewalk bordering one side of the museum, the protesters formed a circle, holding their tour guide identification cards aloft and chanting their demands through a megaphone.

“The protest is held to deliver a message of warning and alert about the lack of security and moral behaviour taking over most touristic and historical sites to the officials,” Hesham Ahmed Al-Shattury, the secretary general of the tour guides’ syndicate, said while standing in his full suit among the protesting guides.

According to Al-Shattury, cultural tourism in Egypt has declined by almost 80 percent following the January uprising, and especially after violent incidents such as the Maspero massacre and the Cabinet clashes.

The protest was surrounded by three big banners displaying the guides’ demands. Save the livelihood of over four million Egyptians working in the tourism sector; save touristic and historical sites from the lack of security and moral behavior; and back the tourism police to support tourist security, they read.

“The dire lack of security in touristic and historical sites has reflected negatively upon cultural tourism in Egypt, a situation which has subjected tourists as well as tour guides to tough harassments, which has sometimes even led to physical assault,” Al-Shattury added.

A tour guide at the protest, Ramy Al-Ameir, told the Daily News Egypt that the main spark behind this protest was a verbal attack a female tour guide was been subjected to almost two weeks ago by a souvenir vendor.

“I don’t want to personify this protest by pinning it down to one individual incident,” Al-Shattury said, commenting on the incident, “especially given that several other attacks have happened before.”

Al-Shattury went on to say that the protesters’ demands were national demands aimed at saving one of Egypt’s most important industries and a main source of national income and foreign exchange.

On the personal level, the protesting guides themselves echoed the various demands and discontent affecting around 16,000 tour guides nationwide. Several guides were displeased with President Mohamed Morsy’s Thursday meeting actors, artists and intellectuals, feeling that a meeting with the guides’ representatives is more pressing.

Al-Ameir, one of the protesting guides speaking against Morsy’s meeting, suggested an alternative to the International Monetary Fund (IMF) loan Egypt is pursuing.

Al-Ameir said his work has been stalled for almost two years, due to the ongoing stagnation in the tourism sector.

It wasn’t only tour guides who took part in the protests. A few representatives of the Free Egyptians party were also among the guides. Mona Monir Rezk, secretary general of the women’s committee in the party, explained that joining the protest was in line with the party’s constant demand for a civilian state.

“We have joined the tour guides in a previous protest last year, which also had similar demands,” Rezk said.

Under the burning sun, a guide leading the protest called upon the other guides to join the circle and chant along instead of standing at a distance. Whether the protest will have a positive effect on restoring tourism is yet to be seen.