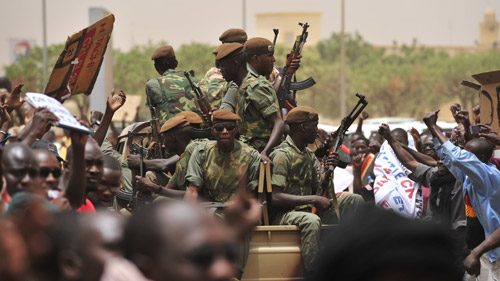 The Movement for Unity and Jihad in West Africa (MUJAO), one of several Islamist militant groups which have taken over north Mali, described the army’s attacks on 16 moderate preachers on Sunday as a “declaration of war”, according to Reuters.

“With this barbaric act that was not warranted, I don’t see any future for Malian army or the Malian government because we are going to continue our southward push to Bamako,” Reuters quoted Oumar Ould Hamaha, a senior MUJAO leader, as saying.

The Malian army shot 16 passengers in a vehicle at a checkpoint in Diabali, a town almost 400 kilometres northeast of the capital, on Sunday. The army claimed the car refused to stop at the checkpoint, making the officers suspect the passengers were jihadists, possibly belonging to the militant groups which took over the north of Mali after the March military coup, according to the official statement released by the Malian government.

The government added that eight of the 16 were Malians, while the remaining eight were from Mauritania.

The number of Mauritanians killed in the attack was contested after Mauritania’s state-owned news agency reported the number as at least 12 Mauritanians. The report also cited the Mauritanian government’s communiqué about the latest incident, where the Malian army was blamed for the killings.

The 16 preachers were on their way to a religious conference to be held on 14 September. Mohamed Coulibaly, one of the conference organisers, told Reuters the preachers had been stopped and searched and it was confirmed by the army they were not armed. “They even called to alert us that they had been stopped at the checkpoint and we alerted the authorities in Bamako,” Coulibaly said.

Meanwhile, A P spoke to a Malian security official who stated, on condition of anonymity, that the Diabali checkpoint was the second one the preachers passed through, having already safely passed through a first checkpoint four hours before the shooting.

“Soldiers arrested the preachers and then led them into the darkness away from the village before shooting them,” AP quoted the official as saying.

A little over a week ago, MUJAO seized the town of Douentza, 800 kilometres north-east of Bamako, from a local militia. This was their furthest advance on the capital since they seized the key northern towns of Timbuktu, Gao and Kidal from Tuareg rebels in March. At the time the group, affiliated with Al-Qaeda in the Islamic Maghreb, denied any intention of seizing the military controlled capital of Bamako unless “the Malian military attempts to take back the north”, according to Hamaha’s statements to the AP.