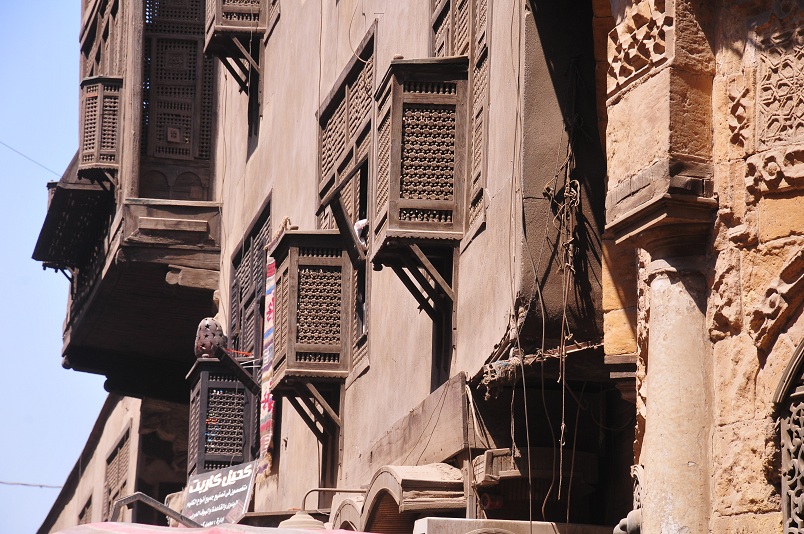 The street is packed with action; the noise of the street vendors calling for their products goes in perfect synchrony with the rolling of carts on the tortuous road. It takes a diligent stare upwards to confirm that the mashrabeya is indeed open; it’s impossible to even sneak a peek at whoever is stealing glances from behind its wooden exterior though. Is the mystery girl staring back? Or is she simply taking a sip of the cold water stored on the inside of the mashrabeya? An almost inaudible bang and it’s a certainty that the window to the outside world has been closed.

Still present within certain older districts in Cairo, the mashrabeyas’ history goes way back. Believed to have appeared sometime between the 11th and the 13th centuries, the mashrabeya’s popularity peaked in Arab countries during the rule of the Ottoman Empire.

The large etched box protruding out of old buildings known as a mashrabeya usually leaves passersby with dropped jaws.

The logic behind such sophisticated windows is not solely concerned with their astounding outer appearance and the glamour they brush buildings with. Apart from the utter privacy they allow homes to maintain while still managing to have their windows open, a matter specifically helpful for Eastern women who are given the chance to stay by the window without being seen, the mashrabeya had a lot to offer on the technical and engineering levels.

Widespread in relatively hot countries with a desert climate, the Islamic engineers who installed mashrabeyas into buildings made several calculations before doing so. The mashrabeyas are therefore located at the spots where the air breeze is usually concentrated and where the sun is most likely to enter. In the summer, the special slits in the mashrabeyas are left open in order to light the place and provide proper ventilation without allowing the sunrays to directly fall into the house and thus heat it up.

A lot of care was also put into the crafting of the mashrabeyas. It was the general norm to have them crafted in wood in Cairo and Basra, and in steel in Bagdad.

This genius creation started slipping into extinction by the early 20th century, only to be replaced by western alternative windows which are not necessarily compatible with the nature of our climate.

Still, few mashrabeyas can still be found in touristic sites such as in the Al-Hussein area and Khan Al-Khalili in Cairo.