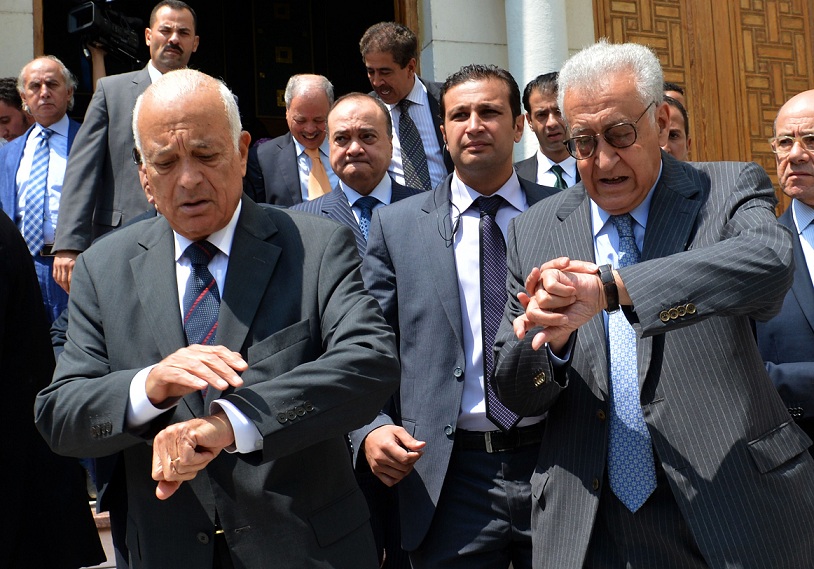 Spokesperson for Egypt’s Ministry of Interior, Nazir Al-Naggari, announced on Monday that delegates from Saudi Arabia, Turkey and Iran were set to arrive Monday in a bid to confront the deteriorating situation in Syria and to end the bloodshed through a political process, AFP reported.

The delegates represent President Mohamed Morsy’s attempt to form a quartet to find a solution to the conflict in Syria. Morsy proposed the quartet at the Organisation of Islamic Cooperation summit held in Saudi Arabia last month. Al-Naggari explained the delegation would “exchange points of view on the tragic developments in Syria and ways to end the bloodbath and achieve the aspirations of the Syrian people.”

Egypt would “work to reach a consensus over an immediate halt to the killing and violence; the preservation of Syrian unity, sovereignty and territorial integrity; and the rejection of foreign military intervention in Syria,” Al-Naggari continued.

The quartet would also seek to “launch a political process with the participation of all segments of the Syrian population… supporting Arab and international efforts aimed at resolving the crisis, including the mission of UN-Arab League envoy Lakhdar Brahimi.” Brahimi will be heading to Damascus in a few days; an important opportunity for the quartet as it could provide them with a mouthpiece in Syria should Brahimi be favourable to the quartet’s ideas.

The ministry said the contact group was open to “any positive contribution from other parties in the future.”

Earlier, Iran’s foreign ministry said a deputy foreign minister, Hossein Amir Abdollahian, had left Tehran for the Egyptian capital to take part in the meeting. “Iran’s participation in this meeting is within the framework of solving the Syrian crisis and to listening to the Egyptian proposal,” spokesperson Ramin Mehmanparast told Iran’s Al-Alam Arabic-language broadcaster.

Al-Naggari also claimed the Arab League will be attending the meeting, although they denied any involvement in the talks when asked by Daily News Egypt, saying they had “nothing to add”.

Iran’s involvement is a historic first for Egypt-Iran relations. Iran’s visit is not an indication per se of growing alliances between Tehran and Cairo, but nevertheless shows Morsy’s desire to open dialogue with the Shi’a-led government.

One of the biggest reasons given by those that oppose military intervention in Syria is that the west has chosen to ignore the crimes against humanity committed by the Free Syrian Army and their supporters, while simultaneously pinning the blame on the Syrian government. The UN High Commissioner for Human Rights, Navanethem Pillay, criticised both the FSA and the government on Monday, according to the Guardian.

Pillay addressed the Human Rights Council in Geneva, criticising the Syrian government’s use of heavy weapons and the shelling of populated areas, while also being “equally concerned about violations by anti-government forces, including murder, extrajudicial execution and torture, as well as the recently increased use of improvised explosive devices.”

Pillay is known for repeatedly calling on Syria to be referred to the International Criminal Court in The Hague. “A referral will make it abundantly clear to all actors in Syria that they will not escape justice and will be held accountable for alleged violations of international human rights law and international humanitarian law.”