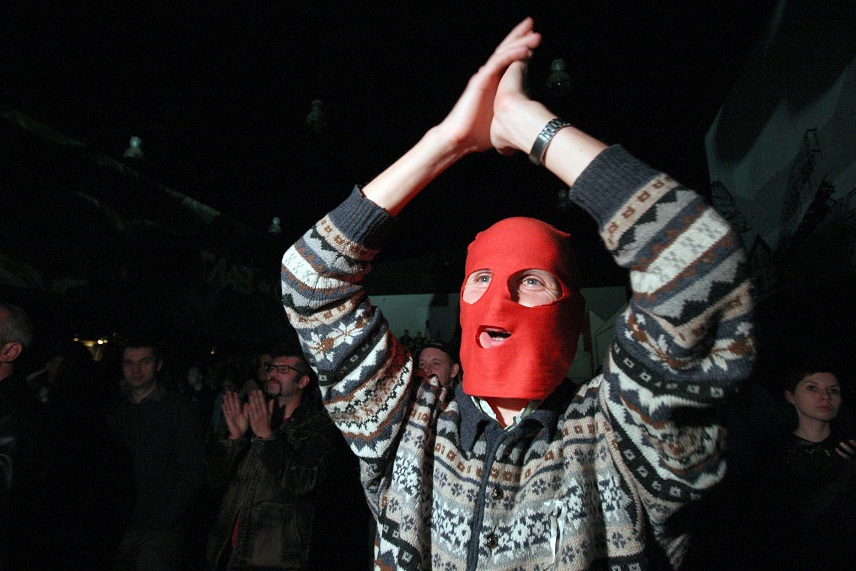 A festival in support of jailed members of Pussy Riot, a musical collective known for their confrontational performances and politically charged lyrics, was held in St. Petersburg on Monday, despite pressure on the organisers to cancel the event.

According to Olga Kurnosova, an organiser of the Free Pussy Riot Fest, city officials attempted to put a stop to the show, while fire fighters threatened to have the venue shut down due to safety violations before the show commenced.

Less than 1,000 people attended the show, AP estimated. The festival showcased veteran rock protest bands DDT and Televizor, both of which have a history of criticising the Kremlin and former Soviet Russia.

Addressing the crowd, a member of DDT compared the current government’s increased crackdown on political protests to Soviet-era dissident repression. “In 1992, we participated in a festival against political repression,” he told the audience. “Twenty years have passed, but it seems almost nothing has changed.”

The show was organised in response to the sentencing to two years imprisonment of three Pussy Riot members in August. Five members of the collective burst into a church in February and recited lyrics critical of the government and insulting towards Christianity. The charge brought against the three was premeditated hooliganism motivated by religious hatred or hostility, while the other two members involved in the incident fled Russia in fear they would be arrested as well.

The collective filmed the church incident and created a music video entitled Punk Prayer: Mother of God Drive Putin Away. The lyrics call on the Virgin Mary to become a feminist and criticises the dedication and support Putin received from representatives of the Orthodox Church.

The arrest, trial and imprisonment of the three women has been widely criticised by the international community. Amnesty International called the women prisoners of conscience in April, following their arrest, arguing that the severity of the response by Russian authorities “would not be a justifiable response to the peaceful – if, to many, offensive – expression of their political beliefs.”

Pussy Riot’s name pays homage to the American underground Riot Grrrl movement of the 1990s, which explored feminism through punk rock. The collective is known for their dislike of Putin’s government and has ties to an anarchist art collective, Voina. Members of the collective perform anonymously in colourful balaclavas and dresses.