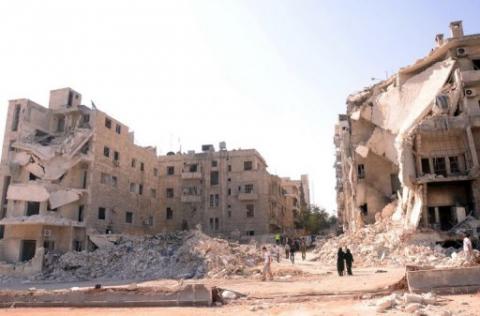 Violence and bloodshed were reported in other parts of Syria as peace envoy Lakhdar Brahimi was set to meet members of the Syrian opposition in Cairo ahead of a planned visit to Damascus for talks with officials, his spokesman said.

British Foreign Secretary William Hague was also in Cairo for talks with President Mohamed Morsi on Syria, amid a diplomatic flurry in the Egyptian capital where Syrian neighbours also gathered to discuss the conflict.

Brahimi would meet “representatives of the Syrian opposition as well as activists and Syrian intellectuals,” his spokesman Ahmad Fawzi told AFP.

The envoy began on Monday what he called a “very difficult” mission to bring peace to Syria, where nearly 18 months of conflict has killed more than 27,000 people according to a watchdog, and over 20,000 according to the UN.

“I realise it’s a very difficult mission, but I think it is not my right to refuse to give whatever assistance I can to the Syrian people,” Brahimi said in Cairo, adding he planned on going to Damascus within a “few days.”

A day after nearly 140 people were reportedly killed across Syria, the Syrian Observatory for Human Rights said bombardments by troops saw fighting ground to a standstill in Aleppo amid reports a civilian refuge was struck.

A resident said rebels tried to storm the central Aleppo district of Midan but were repelled. “Last night the army launched an operation and pushed them north, back toward Bustan al-Basha,” the source said.

In the Aleppo province town of As-Safira, “mortar fire from an air defence battalion targeted residential buildings and a school, where many refugees from disaster-stricken areas sought refuge and shelter,” according to the Local Coordination Committees (LCC), a network of activists on the ground.

The Observatory said it was unable to immediately confirm the report.

The United Nations says more than 1.2 million Syrians, over half of them children, have become internally displaced in the country while an estimated 250,000 refugees sought shelter in Jordan, Lebanon, Turkey and Iraq.

Their plight was put again under their spotlight on Tuesday as US actress Jolie, a special envoy of the UN High Commissioner for Refugees (UNHCR), toured a UN-run camp in northern Jordan along with High Commissioner Antonio Guterres.

“We encourage the international community to do all that it can to support the refugees,” Jolie told a joint news conference at the Zaatari camp, with Guterres and Jordanian Foreign Minister Nasser Judeh at her side.

“It is very emotional to be with people who are wondering who is on their side,” said the Oscar-winning actress who in June donated $100,000 to aid Syrian refugees.

Jordan has said it needs $700 million in international aid to cope with an influx of refugees from the conflict across the border in Syria with some 185,000 inside the tiny cash-strapped kingdom, including 26,000 in Zaatari camp.

“My appeal to the international community is to help us and to help the Jordanian government… to massively invest in improving the living conditions of refugees in this camp. Please help us,” he said.

Meanwhile in Damascus, an explosion rocked the upscale western district of Mazzeh overnight, while pro-regime gunmen clashed with rebels in Barzeh, another wealthy neighbourhood in the northeast, the Observatory said.

One man was killed in the northeastern suburb of Douma in unknown circumstances, while a child died after being hit by mortar rounds in a town elsewhere in the same province, the Observatory said.

The LCC meanwhile reported that helicopters were overflying Damascus and its suburbs while government forces backed by tanks stormed the town of Daraya, just south of the capital where hundreds of bodies were found in late August.

UN High Commissioner for Human Rights Navi Pillay on Monday urged a probe into the Daraya killings, saying: “I am deeply shocked by the reports of the massacre in Daraya and I urge an immediate and thorough investigation into this incident.”

“We must ensure that anyone, on any side, who commits war crimes, crimes against humanity or other violations of international human rights or humanitarian law is brought to justice,” Ban said in Geneva.

In Cairo, the British foreign secretary said he would discuss with Egyptian officials “in particular how the international community can work together to bring an end to the bloodshed in Syria.”

Britain, France and the United States are clamouring for more sanctions on the Assad regime and demand he step down but Russia insists on a negotiated settlement that would involve all the players of conflict.

A regional contact group with delegations from Egypt, Turkey, Iran and Saudi Arabia gathered in Cairo late Monday to discuss the deteriorating situation in Syria and lay the foundations of a broader ministerial meeting.