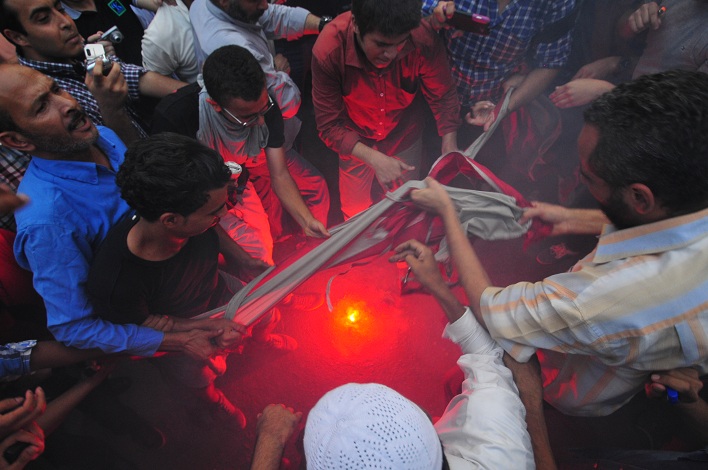 Hundreds of protesters protested in front of the United States embassy in Cairo, and scaled the embassy walls to raise a black flag saying “There is no god but Allah” in place of the American one on Tuesday afternoon. Predominantly Salafi protesters gathered outside the embassy to condemn a film that has been released in the US that is reportedly offensive to Islam and the Prophet Muhammad.

Protesters chanted, “there is no God but Allah,” and other chants calling for the defence of the prophet Muhammad as men held up Qurans and signs. Demonstrators also directed chants against Copts living abroad, as some are reportedly behind the making of the film Muhammad, Prophet of the Muslims.

“We don’t have any problems with our Coptic brothers in Egypt,” said Sheikh Abdallah Abdel Hamid, who was standing in front of the embassy, “but we ask President Morsy to revoke the Egyptian citizenship of those abroad.”

On Monday Nader Bakkar, spokesman for the Salafist Al-Nour Party, stated that those Egyptians involved in the making of the film should have their Egyptian citizenships revoked.

In addition to the protest, strong condemnations of the movie have come from various groups in Egypt. Among the organisations that have condemned the movie is the Coalition of Egypt’s Copts which demanded severe punishment for the people responsible for producing the movie, through an international trial for hurting the feelings of millions of Muslims worldwide.

The coalition added that holding those responsible for the movie accountable will deter anyone else from abusing or attacking any other religion. Furthermore, the coalition demanded the enforcing of international laws on all countries that exercise this “intellectual terrorism.”

In addition to the Coalition of Egypt’s Copts, the US Embassy in Cairo released a statement saying that it “condemns the continuing efforts by misguided individuals to hurt the religious feelings of Muslims – as we condemn efforts to offend believers of all religions.”

The statement added that the embassy rejects the abuse of the universal right to free speech to hurt the religious beliefs of others.

The Free Egyptians Party has also condemned the “production or release of any movie that offends the Prophet (peace be upon him) and it rejects everything that offends religious beliefs or values under the cover of freedom of expression,” in a statement published on Al-Watan news site. The statement added that members of the party will be joining the protest in front of the American Embassy in Cairo.

On another note, Al-Azhar University issued a statement published on Al Jazeera condemning what was referred to as the “chaotic calls by western and international media for the international day of the trial of the Prophet.”

The statement added that the people behind these calls are a class of “vindictive people with sick minds who have always suspicious positions on Islam and Muslims” under the pretext of freedom of expression.