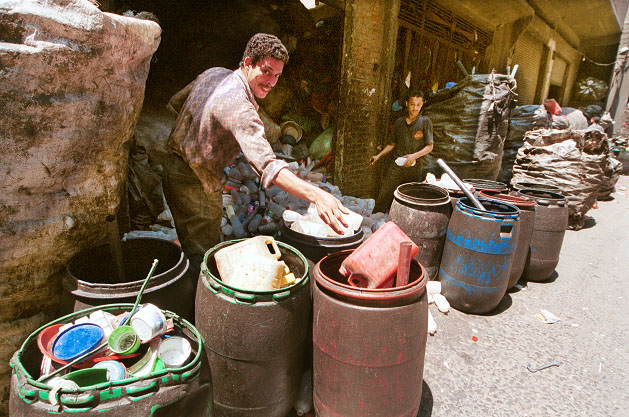 “Only in Egypt do we want to disregard our local experts and import an already made model that does not fit our reality or conditions,” says Mr Ezzat Naem, commenting on the Turkish model of waste management the new government is interested in adopting. Naem is the chairman of the Cleansing, Beautification and Protection of the Environment Workers’ (CBPEW) syndicate, an independent syndicate representing the Zabaleen community in Cairo.

This community was not integrated in the president’s new cleanliness campaign Watan Nazif (Clean Homeland), despite their expertise garnered from working in waste management and rubbish collection for generations. Furthermore, the new government has been consulting Turkish investors to build new waste management factories that will leave the Zabaleen unemployed.

The Zabaleen are informal rubbish collectors who have been working in the business for decades. They manage collection of household waste on a daily basis from collecting to transferring to sorting. They collect waste from households and sort it into non-organic dry waste and organic waste. They then trade recyclable waste and, until their livestock were killed during the 2009 swine flu scare, they fed their organic waste to pigs.

The number of Zabaleen ranges from 150,000-155,000 collectors. The actual workforce is around 90,000. They collect and sort 8,000 of 14,000 tonnes of waste Cairo produces on a daily basis. After processing, this is reduced to an estimated 6,400 tons of sorted rubbish. The sorted materials are sent to paper, metal and glass factories in industrial areas such as 10th of Ramadan City.

However the Zabaleen were deprived of much of the income resulting from this recycling when the government decided to award multinational waste management companies 15 year contracts to manage the city’s waste, which provided bins throughout the city for people to dispose of their rubbish.

Dr Laila Iskandar, chairperson of CID Consulting and an advocate of the Zabaleen community, says, “the system of bins will not work in the streets of Cairo unless you get rid of poverty and improve education. The former will always keep people scavenging for rubbish and the latter preserves the bad public habits we see, so the most efficient system is really the door-to-door.”

According to Iskander, the government claims it cannot renege on the multinational contracts as they could get sued for breach of contract. However, she disagrees, saying, “we know the contracts and we have seen them. These companies are not honouring huge parts of the contracts, so the government can break these contracts without having to worry about going to courts and arbitration.”

The Zabaleen were further disenfranchised in 2009, when the government decided to cull the Zabaleen’s herds of pigs to prevent the spread of swine flu. The rubbish collectors responded by dispensing of their organic waste in the government’s newly issued rubbish bins, which were then left unattended, resulting in open piles of rotting rubbish in the city’s streets.

As a result of their disenfranchisement, the Zabeleen have unified and created a syndicate that negotiates with government officials. The CBPEW syndicate is an umbrella association under which small companies can operate in parallel with multinational companies. Naem explains that the Zabaleen have formed around 38 self-managed companies for which they have official authorisation from the Investment Authority.

They now own 76 trucks which they use instead of their old donkey carts. Most importantly, they have around 890 experienced workers managing the trucks. He adds, “we are not just rubbish collectors, we are entrepreneurs.”

The Zabaleen have been in a long process of negotiations to obtain authorisation from the Cairo governorate to handle the collection in different areas of the city, but negotiations stalled after the revolution.

Michael Hanna, a rubbish collector and member of the Spirit of the Youth organisation, which works closely with the Zabaleen on waste management issues, says, “we met with Abdel Kawy Khalifa, the former governor of Cairo, to discuss our problems back in 2011, and we signed an agreement that Zabaleen companies would be responsible for collecting rubbish from some parts of Cairo. However since the new governor was appointed we don’t know what will become of that agreement.” Once more, the Zabaleen were left feeling frustrated and neglected by the government.

Of President Morsy’s Clean Homeland campaign, Hanna says, “when President Morsy launched his campaign Watan Nazif, we as a community were marginalised. We went to meet Walid El-Sinousi, the head of the campaign, and to their shame no one showed up to meet us.” Another meeting is scheduled to take place, but the precedent makes him pessimistic.

The president’s campaign is said to have removed about 120,000 tons of rubbish in 22 governorates, but questions remain. What is the next step? What happens after the rubbish is removed? Many experts questioned the long term dimension of the campaign. Iskandar says the campaign is “a joke…it is a campaign for weekend volunteers. Cities need a system. It’s a clean-up campaign, not a comprehensive waste management system.”

Furthermore, the inclination of the new government towards adopting a Turkish model of waste management makes the Zabaleen anxious and unsure of their future. The Turkish model focuses on collecting rubbish to generate energy. Rubbish is taken to factories to produce fuel from refuse paper and plastic. Implementing the Turkish model in Egypt would most likely be detrimental to the Zabaleen.

The model seeks to mechanise the process of waste management through building factories that turn rubbish into fuel. This system would render the 90,000 people who work manually in the collection and sorting business unemployed.

Until now the government has been unable to handle Cairo’s incredible volume of rubbish, or to design a system that addresses the different phases of waste management. Environmental specialists and the Zabaleen themselves however suggest different solutions to the problem of rubbish in Cairo. Greiss and Iskandar suggest dividing Cairo into four or six sectors and letting each one coordinate its own system.

The Zabaleen suggest, through their syndicate, using the idea of popular committees that emerged with the revolution and forming one in each neighborhood responsible for rubbish. However as previously, post revolution it seems that the Zabaleen community will continue to experience government negligence unless the new administration prioritises the issue of waste management.