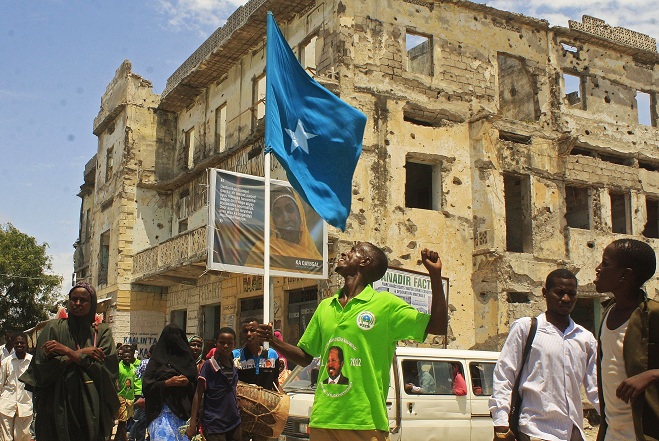 Hassan Sheikh Mohamed was elected president of Somalia on Monday in an overwhelming 190 votes to 79 via secret ballots cast by MPs. He was immediately sworn in as president following the announcement of the result.

“I congratulate all Somalis. The people are taking a new direction. You are now ending the difficult path and taking a new one,” Mohamed told a crowd of supporters, according to Reuters.

He also thanked the people, parliament, and those who ran against him for the position. The president also vowed to support ongoing efforts to rebuild the country with the help of the international community.

The academic defeated Sheikh Sharif Ahmed in a runoff election among Somali lawmakers. The 58 year-old Mohamed is largely regarded as a relatively new face in Somali politics, and an activist who has worked for a number of domestic and international development organisations.

Before UN peacekeepers withdrew from the war-torn country in 1995, Mohamed worked for UNICEF as an education officer inside Somalia for two years and went on to co-found the Somali Institute of Management and Administration Development based in Mogadishu.

Last year he established the Peace and Development Party and is currently the party’s chairman.

Once it is formed, the Mohamed administration will have to face a staggering number of obstacles to bring stability to Somalia, which has been in embroiled in civil war since 1991. Al-Shabab, a militant group with links to Al-Qaeda, controls large parts of central and southern Somalia, and smaller local militia groups occupy security vacuums throughout the country. Somalia also suffers from staggering levels of corruption, with Monday’s vote being subject to allegations of bribery, fraud, and voter manipulation despite the use of a secret ballot during the nationally televised election.

The capital of Mogadishu has made significant progress since government forces managed to drive out Al-Shabab militants last year, and the city has enjoyed relative stability since, despite continued efforts by Al-Shabab to regain ground and maintain its strongholds.

The United Nations Special Representative of the Secretary-General for Somalia, Augustine Mahiga, welcomed the election’s results, “the most significant democratic exercise for Somalia in four decades marks the culmination of that process as a new Somali parliament, chosen by a broad cross-section of traditional elders, elected Somalia’s new president to a four-year term,” he said in a statement. “There is still much to do, but all Somalis can be proud of this process…This is a moment of hope and optimism; a new era for Somalia has begun.”