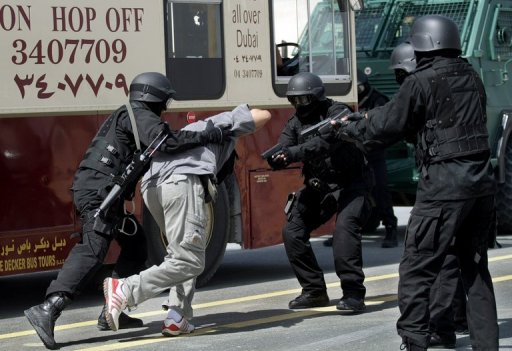 A crackdown against opposition reformists in the United Arab Emirates has continued this week, as three more were inexplicably arrested, including prominent judges and lawyers.

State courts prosecutor Ali Saeed Al-Kindi and former judge Khamis Saeed al-Zyoudi were both been detained without charge and it is not known where they are being held, according to the Arabic Network for Human Rights Information (ANHRI).

ANHRI’s statement called the judges’ arrest “an unprecedented escalation since the establishment of the state of the UAE, as well as being a blunt violation of international laws and regulations which proves the obvious wallow the UAE authorities are currently suffering from.”

“There are unconfirmed claims about the detainees being subjected to assault,” Mohamed Shehata Youssef, a researcher at ANHRI, told Daily News Egypt, explaining that the crack-down is taking place amid a massive media blackout.

Another detainee, a university professor and lawyer was arrested Tuesday, according to Youssef.

“He was defending those already detained,” Youssef said.

Apart f­­­­rom the fresh arrests, 11 detainees were remanded in custody last week. Whereas, member of the ruling family Sheikh Sultan Al-Qassimi has been taken to Abu Dhabi alongside Saleh al-Dhufairi where they were detained, after being held on house arrest – Al-Qassimi staying there for almost 142 days, according to Reuters.

Reuters quoted a family member speaking on condition of anonymity who went to visit Al-Qassimi at the ruler of the northern Emirate’s Ras Al-Khaimah’s palace, where both detainees were held on house arrest, only to be told that Al-Qassimi was taken away.

Al-Qassimi is the cousin of the Ras Al-Khaimah ruler, as well as being the head of the Islamist Islah reformist group.

Youssef mentioned that the peak in this crackdown had started in mid-July, when the Emirati public prosecutor released a statement announcing the arrest of a terrorist cell, without mentioning any further details about the names of those arrested or their alleged crimes. Since then, the number of detainees increased from 24 to 61 this week.

Meanwhile, the UAE government is unofficially claiming that those detained “are all alleged to have been members of an illegal organisation that has organisational, financial and political links outside the UAE”, according to what a source close to the government told Reuters.