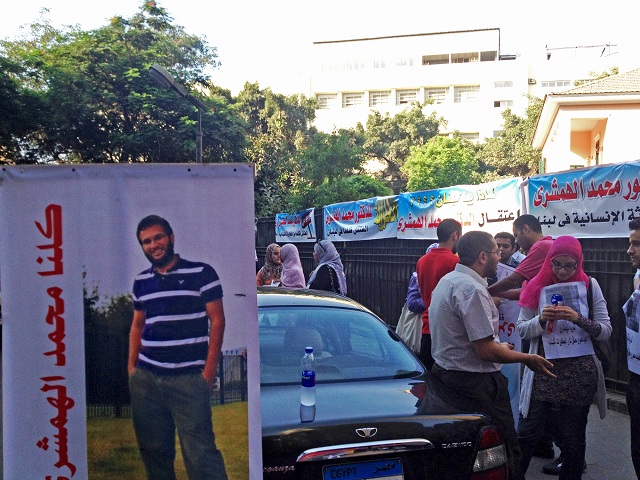 Egyptian psychiatrist Dr Mohamed Magdy Al-Hamshari was released on Wednesday afternoon after being detained in Lebanon for four days. Al-Hamshari was reportedly in good condition following his release and met his parents, who live in Dubai, at the Egyptian embassy in Beirut. He then arrived back to Cairo to see his wife and two children on Wednesday night.

The Egyptian doctor was arrested on Saturday for possessing a satellite communications device that is illegal in Lebanon and was taken in by the Lebanese army for investigation.

Dozens of protesters that included coworkers, friends, and patients gathered in front of the Lebanese embassy in Cairo on Tuesday to demand the release of the doctor, who was not facing any official charges. They also protested against the fact that he was under military detention as a civilian doctor.

Family and friends waited four days before they heard from Al-Hamshari, who told his wife that he was being interrogated but was unable to tell her where he was being detained.

According to Haitham Rizk, a colleague who has been in contact with Al-Hamshari’s family, Al-Hamshari will hold a press conference sometime over the next two days to disclose details of his ordeal. “We want to express gratitude to the Ministry of Foreign Affairs and the Egyptian Embassy [in Lebanon] for their work,” said Rizk.

Al-Hamshari worked in field hospitals in Tahrir Square during Egypt’s revolution before travelling to Banghazi to treat casualties of Libya’s civil war. During his arrest he was coming back from a refugee camp in Jordan where he had volunteered to work with Syrian refugees.

A number of organisations including the Tahrir Doctors and the Arab Doctors Union released statements demanding Al-Hamshari’s release.