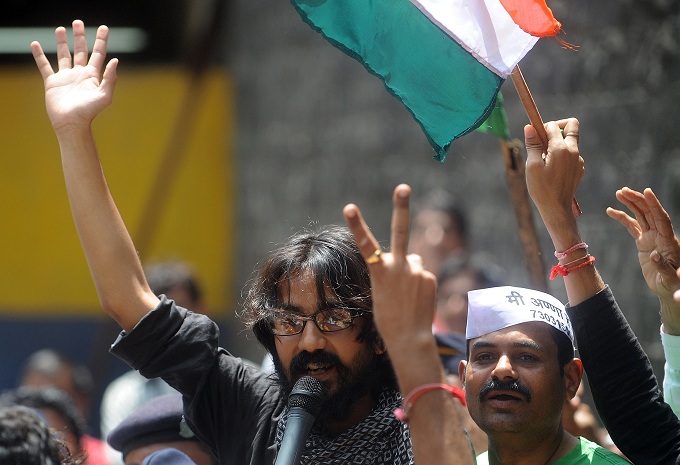 An Indian cartoonist accused of sedition was released on a 5,000 rupee (EGP 550) bail bond Wednesday, in a case which has caused international concern over freedom of expression in the world’s largest democracy.

Aseem Trivedi turned himself in to authorities on Sunday after being charged with sedition in relation to cartoons he produced, Reuters reported. Trivedi appeared in court on Monday, and was remanded in custody until 24 September.

The Bombay high court then ruled on Tuesday that he could be bailed, although Trivedi initially denied the offer, saying he would remain in prison until charges against him were dropped, according to BBC news.

His lawyer, Vijay Hiremath, confirmed his release to AFP on Wednesday, adding that Trivedi’s case is currently being reviewed. “We are hopeful that they will drop the charges,” Hiremath told AFP.

Trivedi last year took part in an anti-corruption movement called India against Corruption. His two most popular cartoons from the campaign included one which replaced three lions on India’s national emblem with three bloody-fanged wolves, with the message “long live corruption”, and another depicting the Indian parliament as a toilet.

A young lawyer, apparently with no links to the government, filed a lawsuit against him, accusing him of sedition through his alleged mockery of national symbols, according to Reuters.

Trivedi is also charged with posting to his website obscene content, constituting an insult to national honour, which resulted in authorities blocking the site, according to Reuters.

Anti-corruption campaigners worldwide reacted to the sedition charges with threats of protest. Human Rights Watch on Wednesday called for the charges to be dropped, according to AFP. “Arresting cartoonists for their stinging satire is a hallmark of a dictatorship, not a democracy,” the group’s South Asia director Meenakshi Ganguly, was quoted by AFP as saying.

“I don’t think making cartoons is wrong… But they (cartoonists) should not make national symbols as their subject,” Indian information and broadcasting minister, Ambika Soni, was quoted by the CNN as saying.

The Indian government has been recently accused of launching a crackdown on freedom of expression, reflected in closing down 300 websites, social networking pages and Twitter accounts, according to AFP.