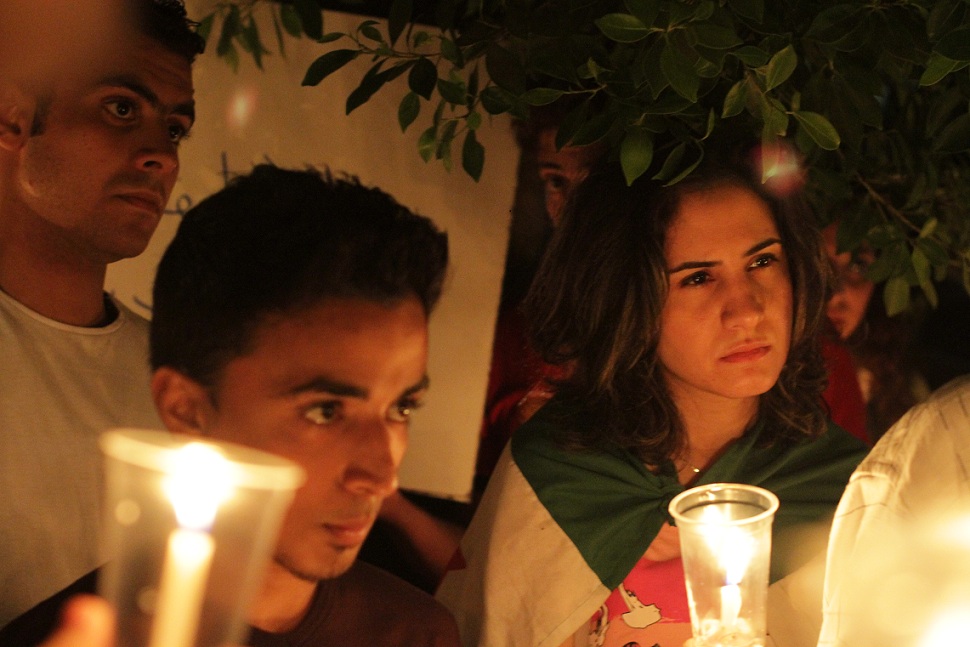 Coming out of the Sadat Metro station exit to the Arab League building, you will witness an interesting scene; the Syrian Revolution tent. With its signs, labels, flags and horrifying pictures of the dead and injured children, you would think that people would be packed inside inquiring about how to help the situation in Syria. Shockingly, the tent is completely empty except for three young men sitting ready for someone inquisitive enough to ask about anything.

Five metres away from the tent, there is a group of mostly Syrian women and children, accompanied by some men sitting uncomfortably on a straw mat on the pavement outside the Arab League and breathing exhaust spewing from cars entering Tahrir Square.

On one side of the mat, some of the women chanted a Syrian song and on the other, six were listening to Abu Ali’s story, an old man who has not been back to Syria for over thirty years since the massacre of Hamah back in the eighties.

These women have been there for the last six days, holding a hunger strike, living only on water. Water bottles are scattered everywhere on the mat. They sit with their backs to the white walls of the League waiting for the right time to light the candles with which they hope to bring light to their cause and grab the attention of pedestrians walking to Tahrir Square.

“We have been here for six days now and want our voices to be heard in any way,” said Rola El Khash as she drank water to try and relieve her dizziness. “We heard about President Morsy’s speech at the league and we decided to tell him ‘we are here’ by holding signs with our demands. However, security came to evacuate the spot where we stood and we couldn’t even stand with our signs.”

El Khash comes from a family affiliated with the opposition, but she said that her family has never been politically active because in Syria there was no one doing any sort of political activities. “In Syria, if you thought about doing something then you would be prone to detention, you can’t imagine, even in your house among your family members you can’t speak of politics,” she said. “Freedom of expression was horribly suppressed.”

As the situation deteriorates in Syria, one of the women discusses how the regime is enlisting Syrian youth in the army to kill their brothers who are protesting. That’s why they feel the need to do something about this brutal regime that is attacking houses with tanks and the air force, starving people and displacing them. The regime is waging war against its people, they say, and not even women or children are excluded.

El Khash and her group are trying to mobilise mothers and women all over the world to join them on 22September for a strike to support Syrian women and children. They are dependent on the support they get from the people and not governments.

Towards the centre of the mat, Lina El Tibi was sitting talking to three other women. Lina lives in Egypt, but she used to travel to Syria constantly to see family members. After the beginning of the uprising, she infiltrated Syria through the Turkish border to Idlib and stayed there for five days to see with her own eyes the situation of the town.

“You can’t visualise the situation over there,” she said. “Every five minutes you would hear the sound of Hawn rockets or a tank bombarding houses. Every day we were forced to eat at a different house because there isn’t enough food. The Assad forces are targeting supermarkets and bakeries so that people have nothing to eat. When you find a supermarket [that hasn’t been bombed] there is nothing in there.”

El Tibi initiated the hunger strike after being inspired by Firas Kassas, a Syrian activist in Germany who has been on a hunger strike since 26 August.

At 8:00pm, the women distributed candles, lit them and held aloft signs condemning what is happening to Syria’s women and children. While holding their candles, they had a discussion about Lakhdar Brahimi’s (the new United Nations envoy to Syria) response to their strike. They felt sad and frustrated that he asked them to leave to eat.

One of them, Salma Jazayerli exclaimed, “these politicians are lethargic, corrupt and uncharismatic. I’m telling you, the Syrian revolution has two things to depend on; God and the people.”

Although Jazayerli is living in Egypt, married to an Egyptian and has Egyptian children, she is disappointed by the Egyptian people. She thinks they are not supporting the Syrian revolution as much as they did the Libyan one.

Nevertheless, she thought that not having enough support is bringing Syrians together, refugees and Syrians residing in Cairo. She illustrated, “we are people who were suppressed for 40 years. We couldn’t open our mouths except to say, we’re at the dentist or at a restaurant. Even in our houses we are afraid to talk among the members of our family or with our neighbors, but now we try to organise ourselves, collaborate with the refugees and Syrians who are residing in Cairo. We get some support from local NGOs but we need more support.”

Sitting across from Jazayerli is Rasha Omran, a Syrian writer, poet and activist who has documented the situation in Syria. Omran along with her daughter used to participate in the demonstrations, in relief efforts and in helping civil groups. She was formally asked to leave the country or else to be detained. For over a month she was stalked, pursued, and threatened by the regime, so she chose to leave Syria.

“I won’t lie to you or pretend to be a heroine,” said Omran. “I was afraid that they would do something to my daughter who was detained at the beginning of the revolution in Damascus, so I had to give in and leave the country.”

Omran is an Alawite activist. She described her house as “an operations room” for Alawite youth activists coming to Damascus from other Syrian cities such as Tartus. She, along with the other women, refutes the sectarian nature that President Bashar Al-Assad tries to depict the revolution with.

She spoke about the Alawite opposition and how the Al-Assad regime reacts to it. When the regime finds a loud voice coming from a minority like the Alawites, it tries to suppress that voice so as not to encourage others to speak up. She continued, “I wasn’t alone from the Alawites, there are many writers, intellectuals and activities who are supporting the revolution.”

These women see in themselves a representation of the Syrian people. For them, there is no such thing as a Sunni, Alawite, Shi’a or Christian Syrian. They believe the regime is trying to portray the revolution as one sect revolting against others, and that’s why they are sending a message through their unity.

Back to the middle of the mat, Georgina Gameel is speaking about female resistance in Syria and the courage they have demonstrated. She moved to Cairo a month and a half ago after losing her home. She spoke of her brother who was shot, giving thanks that he has recovered.

Gameel’s story is similar to the other women. She was pursued by the Syrian authorities for her activism. She was among a group of four women activists who were helping with the relief efforts. One of them was detained. Subjected to torture, she soon divulged the names of the women in the group. Consequently, when their friend was released, they had to hide from authorities. Gameel stayed in her house for three months and she had two options; to surrender herself or to escape Syria. She chose the latter.

“Even though I left Syria, being here is the least I can do to resist with my fellow Syrian women. Back at home we have strong women who are supporting their men on the battlefield and there is even a minority of women who carry guns,” said Gameel.

After forty five minutes, the women extinguished their candles, sat down and kept talking with pedestrians who stopped and sympathised with the women. A couple of Egyptian poets dropped by to show their support and later on former Egyptian parliamentarian Basem Kamel came to salute them.

The women recognise that their group might be small in size and that they might have already got the attention their cause deserves, but they are determined to continue their hunger strike. “If the Syrian people, including children are forced to starve, then we [Syrian women elsewhere] should live it with them too,” said El Tibi. “Then maybe humanity will wake up.”